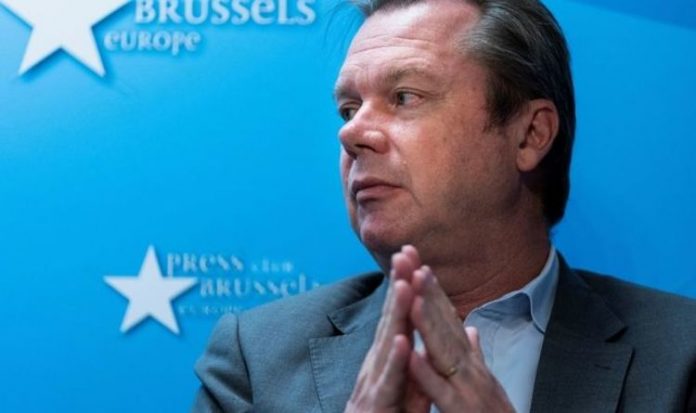 The vaccine is being manufactured at a Valneva facility in Scotland but the fact the company is French-owned sparked a furious response from National Rally MEP Jerome Riviere. He hit out at the EU’s disastrous vaccine roll-out which has led to member states scrambling to get their hands on enough doses while the UK’s deftly-handled mass inoculation programme continues to garner praise from all sides.

Mr Riviere said: “I don’t believe it’s up to the EU to negotiate vaccine contracts.

“In France, we have the company Valneva which will sell its doses to the UK because it is out of the EU.”

The UK move means 100 million doses of Valneva have now been put on order, enough for every adult in the country with the latest batch earmarked for delivery in 2022.

The Government has also retained options over a further 90 million doses for supply between 2023 and 2025. Valneva said the total value of the entire order was up to £1.24 billion.

The vaccine is still in clinical trials, with the early-stage phase 1/2 study expected to read out within the next three months.

The jab is expected to be given as two doses and is being made at a site in West Lothian, with the Government saying the new deal “will bolster long-term vaccine production in Scotland”.

Business Secretary Kwasi Kwarteng, said: “This latest deal is yet another weapon in our national arsenal against this terrible disease, and will ensure we have sufficient supplies to protect the British public in 2021 and beyond.

“Backed with major investment from the UK Government, Valneva’s site in Scotland will be a vaccine production powerhouse, working flat out to ensure we can quickly deploy jabs across the UK if their candidate is approved, while supporting top quality, local jobs.

“Thanks to our incredible UK Vaccine Taskforce, we have now secured a bumper portfolio of over 400 million vaccines, putting our country in an exceptionally strong position to defeat this virus once and for all.”

If it is approved, 60 million doses could start to be delivered to the UK by the second half of 2021.

On Sunday, International Trade Secretary Liz Truss said it is “too early” to determine when the UK will send vaccines abroad.

She said: “We first need to make sure that our population is vaccinated.”

But she insisted it would be damaging to become a “vaccinated island” while other countries go without.

Ms Truss said: “It’s a bit too early to say about how we would deploy ‘XX’ vaccine, but we certainly want to work with friends and neighbours, we want to work with developing countries because we’re only going to solve this issue once everybody in the world is vaccinated.”