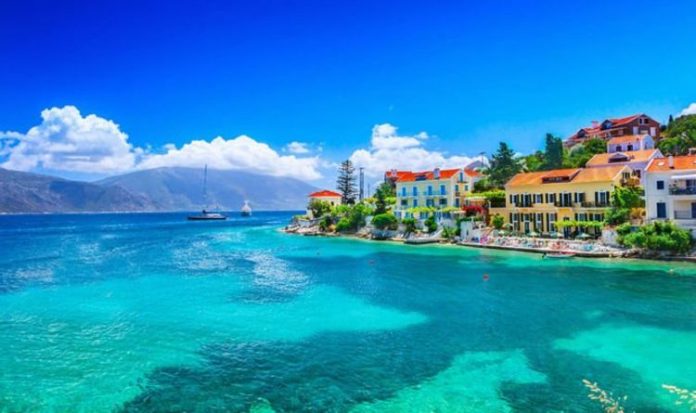 Greece predicts UK tourists could start flocking there by May, while Spain, Portugal, Cyprus and Malta raised hopes of opening their doors for Britons who have been immunised against Covid. Cyprus was the first to say it would scrap entry requirements like testing and quarantine for travellers who get vaccinated. This could come into force as early as next month. Denmark has confirmed plans to introduce vaccine passports by the end of this month.

Greece thinks tourists could flock to the country by May (Image: Getty)

Sweden announced on Thursday it hopes to launch a digital coronavirus vaccine passport by the summer, if there is an international standard in place by then.

And easyJet airline boss Johan Lundgren said he thought that Britain’s vaccination programme would be enough to allow safe travel.

All of this means hopes of a summer tourism season have been reignited for Covid-weary Brits, who are desperate to get away for a week or two.

British government officials have reportedly told the Greek Ministry of Tourism that our vaccine programme is so advanced that our holidaymakers will “save their lucrative summer season”.

UK officials are also said to be looking into the creation of a digital vaccine passport – although Downing Street denied that yesterday.

In Spain, Tourism Minister Reyes Maroto hinted a “vaccination certificate” would allow entry to his country later in the year.

The number of holidaymakers heading to Spain from the UK fell by 82 per cent in 2020 (Image: Getty)

The number of holidaymakers heading to Spain from the UK fell by 82 per cent in 2020 due to the pandemic, with the Balearic Islands hardest hit. Just 223,000 travellers from the UK visited the archipelago last year, compared to 3.7 million in 2019 – a plunge of 93 per cent.

Mauricio Carballeda, the president of the Palmanova- Magaluf Hoteliers Association in the Balearic Islands, sounded a note of caution as he said: “The British are going at a strong rate [for vaccinations] and we will have to see what level of immunisation there is here. The recovery will begin in summer, not before.”

He said of last year’s disastrous season: “The quarantine [on visitors returning from Spain to the UK] was a deathblow.

“Instead of holding on a little longer, hotels had to gradually close because the impact of the fall in British tourists was devastating. In October, all the facilities were closed.”

Last summer hotel occupancy in Spain was between 30 and 40 per cent. In a normal year, it is more than 90 per cent. It was domestic tourism that helped compensate for this loss, with many establishments surviving thanks to visitors from Spain.

Cyprus was among the first to scrap tourist ban (Image: Getty)

Currently the country is battling another surge in Covid cases. The head of the Canary Islands tourism department, Yaiza Castilla, admitted that the winter high season was a lost cause as Spain and the main markets in Europe were experiencing “one of the worst moments of the pandemic”.

But Spanish government officials are hopeful that 70 per cent of the population will be vaccinated by the summer.

Meanwhile in Greece, Prime Minister Kyriakos Mitsotakis said he was “cautiously optimistic” of a lucrative summer.

He added: “Essentially we are dependent on the pace of vaccination in our main markets.” Tourism was responsible for a fifth of the country’s GDP in 2019. In a normal year, two million Britons travel there, second only to Germans.

Grigoris Tasios, president of the Hellenic Hoteliers Federation, said: “Greece has long been a favourite holiday destination for the British.

“But with the rate of inoculations in the UK largely out-pacing all others across Europe and beyond, British travellers will be among the safest to travel here by as early as May.”

Yesterday the UK’s Foreign Office minister James Cleverly said: “The decisions that individual countries make about their own incoming arrangements is obviously up to them.

“We are incredibly proud of the speed and the breadth of our vaccination rollout and, of course, I think the whole world hopes that the vaccination programme will be a way of getting back to normality. It is often the case that the entry requirements for countries are for vaccines, and that is not an uncommon practice.

“We will work with international partners to help facilitate their border arrangements.”

Holidaymakers could need to have the vaccine before they travel abroad (Image: Portugal)

Travellers to the UK face enforced hotel quarantine for 10 days from February 15 if they arrive from one of 33 countries hit by Covid variants.

Currently, all arrivals must have a negative coronavirus test taken no more than 72 hours prior to travelling and complete a Passenger Locator Form to say where they will be staying.

Former health secretary Jeremy Hunt said having coronavirus immunity passports was a “very sensible policy” and that other countries had shown how such schemes can work”.

He added: “You need something that shows whether someone has had a vaccine and whether they have been tested recently.

“And I think other parts of the world have shown how these schemes can work quite effectively.”