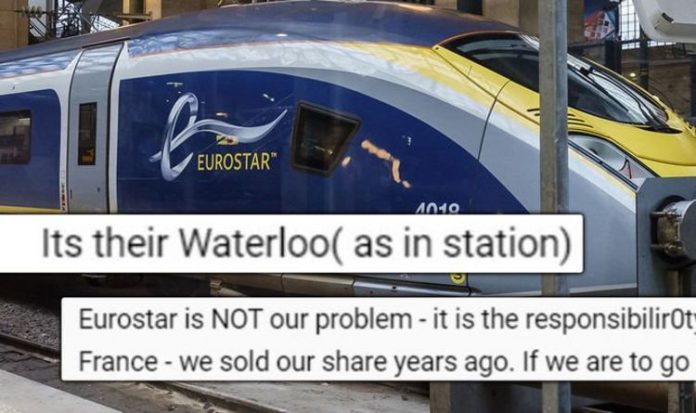 The rail company’s future is under threat after a sustained drop in passenger numbers as the health crisis continues to hammer the European travel industry. It is now offering just one return journey a day to its destinations – London, Brussels, Paris and Amsterdam – after a 95 percent drop in demand. Bosses have warned Eurostar is “fighting for its survival” and called for financial help from both the British and French governments.

But appeals for the UK to come up with a financial rescue package, reported by Express.co.uk, has been met with a furious response by readers.

One said: “The UK has protected its own interests and infrastructure such as airlines. I don’t recall France handing money over to protect Heathrow or Manchester airports.

“Eurostar belongs to France so it is up to the EU to bail it out.”

Another reader said: “It’s privately owned, mainly by the French SNCF. Tell them to do one!”

Another said: “They have to be joking. Why should we help them when all they want is to punish us for leaving.”

Some readers pointed out the UK sold its interest in Eurostar many years ago.

One said: “Eurostar is NOT our problem. It is the responsibility of the owners – mainly France. We sold our share years ago.”

And another said: “It is nothing to do with the UK. Macron and the French have made it clear they hate the UK so MEPs should go to Brussels and ask them to bail out the French.”

The MEPs wrote to Transport Secretary Grant Shapps and his French counterpart urging them to consider a joint bailout of the rail firm.

Their letter said: “The future of rail travel across the Channel is at stake if no solution is found.

“This would not only negatively impact economies on both sides of the Channel and lead to significant job losses, it would also seriously undermine efforts to make transport more sustainable in Europe.

“Rail travel is much more sustainable than air travel, and it is crucial that we service more and more short-haul journeys via this mode.”

While Eurostar is in negotiations with both London and Paris over a potential bailout, bosses have bemoaned the lack of support compared to airlines.

Irish MEP Ciaran Cuffe, who organised the letter, called on governments to consider the environmental impact of allowing the rail link to fail while airlines are bailed out.

He said: “Allowing Eurostar to fail would mean significant job losses and deal a massive blow to sustainable travel between the UK and the EU.

“Together with a group of cross-party MEPs and colleagues in the UK, I am calling on all sides to work together to ensure a solution is found as soon as possible.

“Eurostar’s survival is in the interests of both the EU and the UK. If this requires funding from both the UK and French governments, then the money must be found. Sustainable travel deserves support.

“Airlines have received massive support to survive the pandemic. Therefore, it is fitting that more sustainable travel modes also receive the help they deserve to recover as travel resumes later this year.”