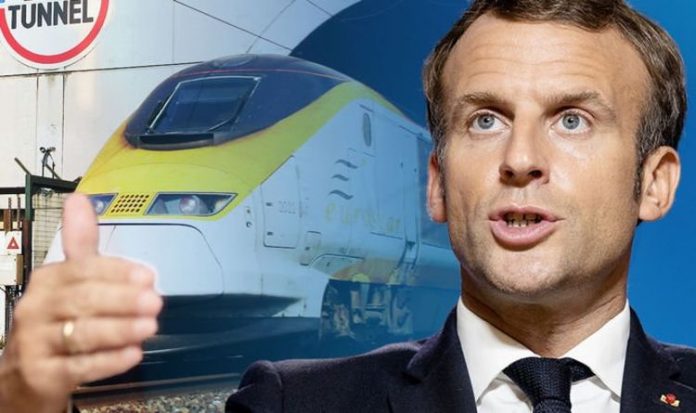 Eurostar is currently 55 percent owned by French state rail company SNCF. In 2015 the UK Government, headed up by then Prime Minister David Cameron, sold its stake to private companies for £757million. But in November, the alarm bells began to ring when Eurostar revealed it was “fighting for its survival”.

Last weekend, a spokesman for Eurostar said: “Without additional funding from the Government, there is a real risk to the survival of Eurostar as the current situation is very serious.”

French Transport Minister Jean-Baptiste Djebbari has revealed he is in discussions with UK counterpart Grant Shapps.

Majority owner France has already pumped £178million into struggling Eurostar, which has seen passenger numbers crash by 95 percent since last March following the beginning of the coronavirus pandemic, which has severely disrupted travel across the Channel.

Several reports have suggested that with lockdowns enforced throughout the continent, Eurostar could soon run out of cash.

Mr Djebbari told a parliamentary hearing in Paris: “We are working with the UK on mechanisms for aid that are proportionally pro rata to the implications of each in Eurostar.

“The Government will back Eurostar to maintain this strategic link between our two countries.”

He insisted the French state will be “at Eurostar’s side in order to maintain this strategic link between our two countries”.

The Transport Minister added support will be provided “based on our involvement in Eurostar, so that we can financially sustain its business model”.

“It is unique in offering an environmentally friendly, direct, connection to mainland Europe.

“Trips from London to Paris, Brussels and Amsterdam on the Eurostar emit between 80-90 percent less greenhouse gas emissions per passenger than the equivalent short-haul flights.

“Like airlines, quarantine and travel restrictions have blighted Eurostar’s access to its markets during the pandemic. Unlike airlines, Eurostar has been shut out from government loans that have offered a lifeline.”

He added: “It needs a joint, bespoke UK-French solution to help it through this crisis.”

He said “we simply cannot afford to lose Eurostar” because it is “unique in offering an environmentally friendly, direct connection to mainland Europe”.

Business leaders in London had written to the Government urging it to not let Eurostar “fall between the cracks of support”, citing the additional help providing to the aviation sector during the peak of last year’s national lockdown.

Eurostar has been battered by the coronavirus pandemic, with passenger numbers plummeting by 95 percent.

The firm had been operating 50 daily services prior to the pandemic.

Several of Eurostar’s unused trains are currently being stored at its depot in Temple Mills, east London.