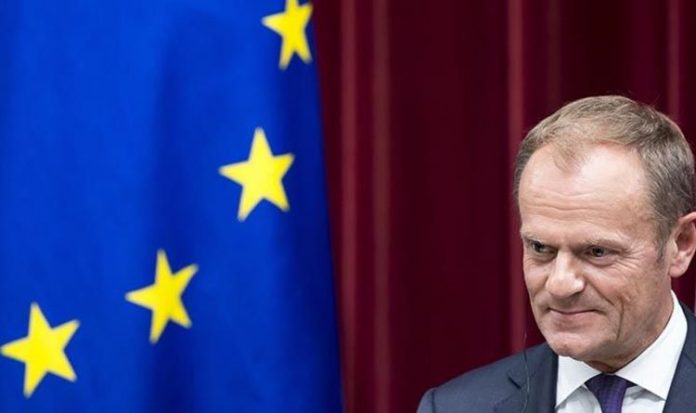 The areas of major contention cover defence co-operation, trade and Ireland, with the deadline for agreeing a deal fast-approaching next month.

EU Council chief Donald Tusk entered the debate this week by reminding unyielding Eurocrats including Michel Barnier, the French politician serving as European chief negotiator on Brexit, talks are supposed to be aiming for damage limitation.

Mr Tusk said: “With only six months to go, we are entering the final weeks of negotiations. Let me recall that limiting the damage caused by Brexit is our shared interest.

“Unfortunately, a no deal scenario is still quite possible. But if we all act responsibly, we can avoid a catastrophe.”

Now foreign ministers from Poland, Lithuania and Romania also warned that the EU’s global influence could be dangerously weakened, without any future input from the UK.

Jacek Czaputowicz, Linas Linkevicius, Lithuanian and Teodor Melescanu said in a column for Politico that Britain should get an “unprecedented” security deal.

They recognised the leading role Britain still plays on the world stage and said the EU should operate “hand-in-hand” with this country.

They said: “Without Britain, the EU’s stance on the global stage may weaken, making it more vulnerable to external threats. It’s in the EU’s interest to involve London in the area of security and defence policy as much as possible.

“Britain’s withdrawal from the EU is an unprecedented situation and as such requires unprecedented solutions. That is why we must ensure there is a constant flow of information between us, and that the UK’s voice is heard.”

Mr Barnier previously insisted that Britain’s role in EU security and defence policy should be much more limited.

An EU diplomat said: “This fits a pattern you’ll see more from the Eastern members. It’s going to get harder to maintain unity from now on as we reach crunch time on Brexit.”

Hardline Eurocrats want want a tightly worded trade agreement document imposed on Britain – if a Brexit deal is possible – while the question of whether a softer border can exist between northern Ireland and EU member the Republic of Ireland remains a thorny issue.

But the Netherlands has come out saying that the UK should be left with room to manoeuvre further after the exit process begins next March.

UK prime minister Theresa May has been bullish in her support for her Chequers negotiating blueprint, which hardline Brexiteers claim is too soft.

The UK is set to leave the EU in March next year, and negotiations between the two sides are still taking place. Mrs May set out her proposals for the key issue of cross-border Irish trade after a Chequers summit in July, but it has been fiercely criticised by hardline Brexiteers who say plans for a “common rulebook” on goods would compromise the UK’s sovereignty.

In the event of No Deal, the EU wants to effectively create a border down the Irish Sea. But the PM has always said any border would be unacceptable and the UK must be seen as a whole, including northern Ireland.

Speaking to Panorama, Mrs May said without UK backing for the Chequers plan “I think that the alternative to that will be having no deal”.