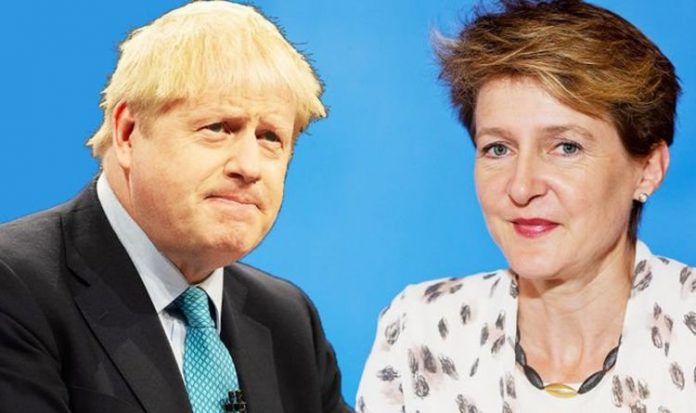 Prime Minister Boris Johnson is expected to fly to Brussels later this evening for Brexit trade talks with European Commission President Ursula von der Leyen. Time is running out to reach a deal before the end of the transition period on December 31. The pair will hold talks over dinner, after negotiations between officials once again did not yield any breakthroughs.

The key sticking points in the talks remain in the areas of “level playing field” conditions for business, fishing rights, championed by France, and how any trade deal might be implemented.

A UK government source said progress at a political level may allow the negotiations – between the UK’s Lord Frost and EU’s Michel Barnier – to resume over the coming days.

However, the source added that it was important to be “realistic” that an agreement might not be possible.

Mr Barnier appears to have also rejected the idea of striking mini-deals with Britain to avoid the immediate shock of a no deal Brexit.

As the clock ticks down and tensions rise, in an exclusive interview with Express.co.uk, Alan Winters, director of the Trade Policy Observatory at the University of Sussex, revealed one of the possible reasons behind the EU’s unwillingness to compromise on certain areas.

Mr Winters said: “The EU was so dissatisfied with its relationship with Switzerland because it consisted of a whole pile of bilateral deals.

“That made life very messy.

“And it also prevented cross-retaliation.

“It more or less prevented the EU saying ‘if you violate what we have agreed in this agreement, we are going to retaliate doing something in this area’.”

JUST IN: No deal projections are ‘overblown and misleading’

It is associated with the Union through a series of bilateral treaties in which Switzerland has adopted various provisions of EU law in order to participate in the Union’s single market, without joining as a member state.

All but one – the microstate Liechtenstein – of Switzerland’s neighbouring countries are EU member states.

It took 17 years for Bern to hammer out a one-off bilateral trade deal, which was said to be nowhere near as complex as the one Mr Johnson is trying to negotiate.