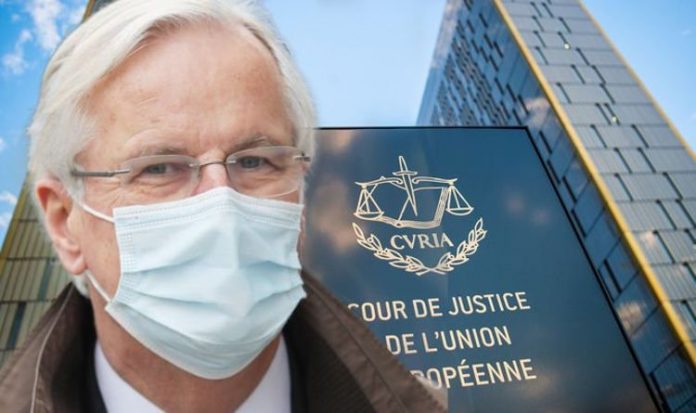 The British and European Union negotiating teams are continuing talks in London this weekend, in what have been described as the most crucial post-Brexit trade discussions. The bloc’s chief negotiator Michel Barnier has offered Britain 15 to 18 percent of the quota European fleets currently take from British waters. Downing Street is said to want at least 80 percent returned to the UK – something Brussels continues to view as “wholly unacceptable”. While the bloc refuses to budge on its red lines, Prime Minister Boris Johnson has agreed to keep Britain tied to the European Convention on Human Rights (ECHR).

Britain had previously rejected EU demands to implement a commitment to retain membership of the ECHR into domestic law as the price for the internal security pact.

The ECHR is an international agreement drawn up by the Council of Europe, enforced by the Strasbourg-based European Court of Human Rights.

However, several other issues remain in the areas of “level playing field” conditions for business and how any trade deal might be implemented.

Much of the disagreement centres on the role of the European Court of Justice (ECJ).

As Brexiteers fear the result of the 2016 referendum could be betrayed with a less than substantial trade deal, draft negotiating documents reveal Brussels has been wanting to keep Britain under its courts ever since the Brexit talks started.

The demands were contained in a paper that outlined the key negotiating guidelines for Mr Barnier, who was about to start withdrawal agreement talks after Britain’s general election on June 8, 2017.

Ending free movement of workers from EU states, budget contributions to Brussels and oversight by the European Court of Justice (ECJ) were central to former Prime Minister Theresa May’s plans for leaving the EU, which was due to happen in March 2019 after a two-year negotiating period.

However, in language that echoed a tough line taken by the 27 other EU leaders, the paper spelt out Brussels’ aim to protect the rights of three million EU citizens living in Britain, extract cash from London to cover a wide range of existing commitments and ensure EU judges could hold Britain to the treaty after Brexit.

The paper said the exit treaty needed to set a “global amount” to honour financial obligations, subject to later adjustments and “a schedule of annual payments” that would have reflected the fact that loans and guarantees made by the EU while Britain was a member extended well beyond 2019.

During the transition period, rules would have been enforced by the ECJ, the paper stated, in one of numerous references to the Luxembourg judges’ continuing jurisdiction over Britain.

Former Prime Minister Theresa May had promised to “bring an end to the jurisdiction of the court in Britain”.

The EU claimed that ECJ jurisdiction was the “only possible solution” and it had previously been a sticking point in other negotiations.

Relations with Switzerland have been repeatedly pushed to breaking point by the refusal of the Swiss to accept a role for “foreign judges” in enforcing treaties.

An agreement between the EU, Norway, Iceland and Liechtenstein is interpreted by the court of justice of the European Free Trade Association (EFTA) states, but Britain argued that a special UK-EU court, or a more informal system without judges, would have been better suited.

JUST IN: Douglas Hurd turned Britons into EU citizens ‘WITHOUT reading what it

The leaked document stated the EU could have considered an “alternative dispute settlement” system for the treaty but only if that was “equivalent” to the ECJ.

Despite almost two years of talks and uproar from many Brexiteers, Britain had to back down.

During the transition period, the UK remains bound by ECJ decisions, and more generally by EU law.

In an open letter addressed to Conservative MPs and donors of the Tory party in 2017, Mr Johnson’s former chief adviser Dominic Cummings argued Mrs May’s decision to trigger Article 50 without a clear plan was like “putting a gun in your mouth and pulling the trigger.”

He claimed the Government’s plan was to keep Britain in the EU in all but name, pointing out that preparations for life outside of the single market and customs union had not begun.

He wrote: “The Government’s nominal policy, which it put in its manifesto and has repeated many times, is to leave the single market and customs union and the jurisdiction of the ECJ.

“This requires preparing to be a ‘third country’ for the purposes of EU law. It requires building all the infrastructure and facilities that are normal around the world to manage trade.

“This process should have started before triggering Article 50 but the Government has irretrievably botched this.

“Having botched it, it could have partially recovered its blunder by starting to do it afterwards.”

He added: “No such action has been taken. Downing Street, the Treasury, the Cabinet Office and the Cabinet have made no such preparations and there is no intention of starting.”

He argued the Government’s promise to maintain frictionless trade between Britain and the EU was “logically, legally and practically incompatible” with being outside the single market and customs union.