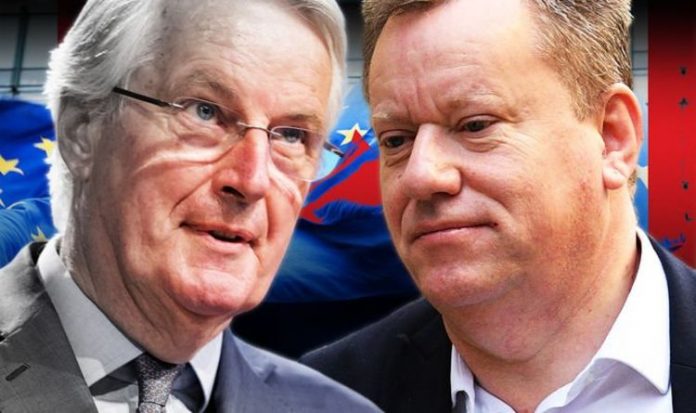 Downing Street is concerned the European Union is still not prepared to agree to the same terms it has already granted Canada. No 10 has claimed eurocrats are failing to treat the UK as an independent nation – despite time now running out to reach an agreement. A UK source close to talks said: “We have been totally clear that we want nothing more complicated than a Canada-style relationship based on free and fair trade.

“It has always been our preference to reach a deal and we are working hard to get one, but only if we can reach one that’s compatible with our sovereignty and takes back control of our laws, our trade, and our waters. That has been our consistent position from the start and we will not be changing it.

“If we cannot reach an agreement that fully respects UK sovereignty, we will leave on Australia-style terms and will prosper in doing so. The PM said this on October 16 and is confident we can do it because we always knew there would be change on January 1 whatever type of relationship we had.”

Trade talks between Britain and the EU are being held in Brussels this week, but serious differences on fishing rights and the so-called level playing field remain.

Prime Minister Boris Johnson insists that Britain is not afraid of leaving the bloc without an agreement if EU negotiators refuse to accept the UK as an independent nation.

As the clock ticks down and tensions rise, it appears that Brussels did once promise the UK the very thing it is now denying.

Framework documents from Mr Barnier reveal that London’s insistence on quitting the single market and customs union meant that a “basic EU-Canada-style deal” was the only option.

The documents were provided to Mr Barnier’s team in 2017 for a “preparatory discussion” on the “framework for the future relationship”.

They explained that British demands for “regulatory autonomy” as well as its failure to obey European Court of Justice rulings meant it was “not compatible” as a partner within the EU framework.

The papers, originally published by Politico, explained that taking in “single market arrangements in certain areas” or managing the “evolution of our regulatory frameworks” would not work within EU law.

This meant that the remaining model would have had to be in line with a “standard free trade agreement (FTA)”.

Moreover, not long afterwards, European officials claimed Mr Barnier was preparing to present Britain with an agreement similar to the one struck with Canada.

At the time, the deal was a “fallback” plan, as Brussels was waiting for former Prime Minister Theresa May to take the lead in proposing a new basis for relations.

One senior European official working on Brexit told the Financial Times the EU side was preparing to ultimately take the initiative in the form of a blueprint based on the EU-Canada trade deal.

The official said: “If the Commission sees that it’s not getting any clarity on this then it is preparing a ‘take it or leave it’ proposal.

“This would be in case everything goes pear-shaped.”

In 2019, former EU Council President Donald Tusk also claimed that “from the very beginning, the EU offer had not just been a Canada deal, but a Canada+++ deal, much further-reaching on trade, on internal security and on foreign policy cooperation”.

The “plus” came from linked agreements on fisheries, aviation, security and foreign policy coordination, which are not included in the Canada-EU agreement.

However, it is not clear whether the former EU Council President also wanted the UK to sign up to “specific and effective” guarantees.

Lord David Owen, former Foreign Secretary and co-founder of the Social Democratic Party (SDP), told Express.co.uk just how significant this change in the EU’s position is.

He said: “Firstly, the spokesman is Michel Barnier, but is it Barnier himself or is he under instructions?

“If he is under instructions, the instructions are coming from Emmanuel Macron, who has told him he does not want a long deal and he is not prepared to live with a Canada settlement.”

He noted: “It may be others, though. It may be Barnier reading the view of the European Parliament.

“But under Donald Tusk, the former President of the EU Council, the British people and the British Government were told on a number of occasions that a Canada-style deal was acceptable.

“Now we are told it has been withdrawn and that we live too close to them to get one.”

Speaking in Paris before the negotiations on a future trade deal started, Mr Macron did urge Mr Barnier to be “cold blooded” during the talks with the UK.

He said: “It will be a complex negotiation that should be approached in cold blood by our negotiator Michel Barnier.”

The French President also claimed Mr Barnier should have pushed to protect the EU’s financial interests, such as maintaining access to British waters for fishermen.

He added: “The preservation of deep ties with the UK, namely on foreign policy and security, and the defence of the interests of the EU.

“The UK wants a short negotiation that ends by the end of 2020, it will be up to the UK to show during the negotiation, flexibility that is in line with these ties to Europe and this ambitious schedule.”