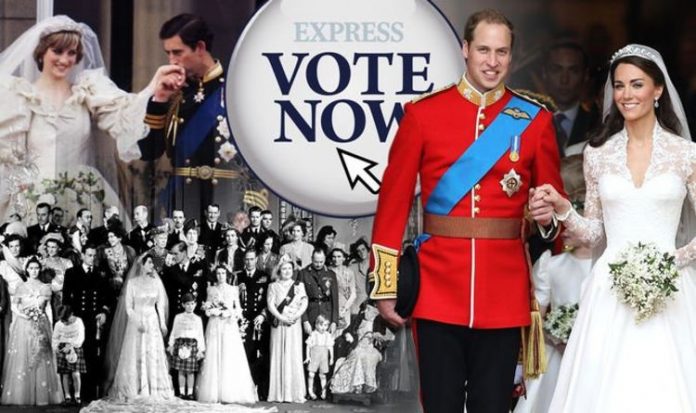 The monarch and the Duke of Edinburgh released an adorable photo to mark the milestone, which shows the pair reading anniversary cards in Windsor Castle. The Queen, then Princess Elizabeth, tied the knot with Philip on November 20 1947 in a ceremony at Westminster Abbey. She wore a Norman Hartnell long-sleeved dress which featured a short train and topped the look off with a tiara and an embroidered veil.

The couple thrilled crowds gathered outside Buckingham Palace afterwards by waving from the balcony.

The bride, who was also celebrating her 25th birthday, chose an embroidered Tudor-style wedding dress.

The couple celebrated the afters of their wedding at Buckingham Palace before setting off on their honeymoon on the Royal Britannia yacht.

Despite the huge significance of the Queen’s big day, it was Prince Charles and Diana’s nuptials which were dubbed as the “wedding of the century”.

Which royal wedding is your favourite? Vote below (Image: GETTY)

The Queen and Prince Philip wave from the palace balcony (Image: GETTY)

The heir to the throne wed Diana Spencer at St Paul’s Cathedral in London on July 29 1981.

The young bride donned an extravagant gown created by David and Elizabeth Emanuel.

It was adorned with 10,000 pearls and a 25-foot train trailed behind Diana as she made her way up the aisle.

After her big day was watched by 75 million people on television, Diana went on to become known as the “People’s Princess” and carve out her own role as a royal wife.

Charles and Diana travelled from the ceremony in a horse-drawn carriage (Image: GETTY)

Prince Andrew’s wedding to Fergie was another royal spectacle which thrilled fans.

The Queen’s third child tied the know with Sarah Ferguson, whom he had known since childhood, at Westminster Abbey on July 23 1986.

The piece was adorned with beaded symbols close to the couple’s hearts, including thistles, anchors and bumblebees.

Fergie wore a floral crown on top of a diamond tiara.

The bride wore a dress designed by Samantha Shaw featuring a long, fitted coat with long sleeves and an ivory train.

The wedding was a family occasion rather than a state event and did not have military involvement.

Sophie and Edward wave to the crowds (Image: GETTY)

And a new generation of royal fans were treated to another historic spectacle on April 29 2011 with the wedding of Prince William and Kate Middleton.

The couple, who met at university, chose Westminster Abbey as the location for their ceremony before making their way to Buckingham Palace for celebrations.

It featured a Victorian-inspired corsetry, a V-neck and long sleeves.

Kate wore a crown borrowed from the Queen and a veil embroidered with flowers.

Prince Harry’s wedding to American-born actress Meghan Markle on May 19 2018 at St George’s Chapel in Windsor was watched by hundreds of millions of TV viewers.

In the UK alone 27.7 million people tuned in.

Meghan’s dress was designed by Clare Waight Keller for Givenchy and featured a bateau neckline and three-quarter length sleeves.

Although Meghan was divorced at the time of her engagement, she was permitted to marry in the church after she was baptized.

The couple’s wedding was the first full-blown royal wedding of a divorced person to take place within the Church of England.

Charles and Camilla tied the knot in April 2005 but they chose a civil ceremony as both were divorced.

The pair also held a Church of England service of prayer and dedication but did not marry in a church.