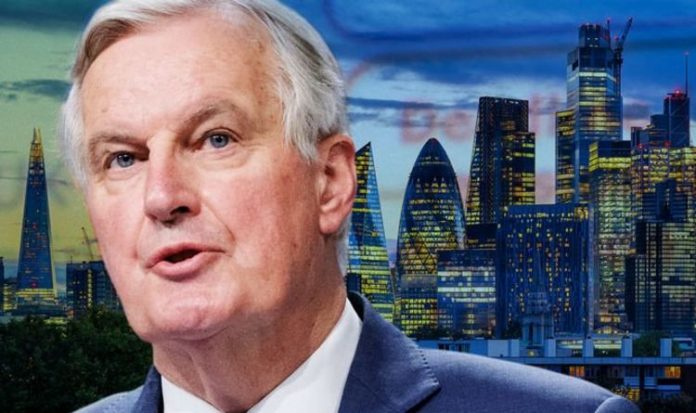 Brexit negotiations with the EU started up again in January, with talks on financial services. After months of fraught talks, new rules for trade were finally agreed on Christmas Eve, just days before the end of the transition period. However, in a document spanning over 1,200 pages, there was very little mention of financial services: a sector that accounts for seven percent of the UK’s economy and 10 percent of its tax receipts.

Prime Minister Boris Johnson himself admitted the trade deal struck with the EU had failed to meet his ambitions on financial services.

The two sides hope there will be a “memorandum of understanding” in place by the end of March – but it is expected that these talks will only produce an agreement to consult each other before making regulatory decisions.

The City of London’s most influential lobby group CityUK is urging Brussels to grant regulatory equivalence to the sector, as it is “in the interests of customers and clients in the EU”.

Some political commentators and economists in the UK, though, believe Brussels’ intransigence towards London might not necessarily be a bad thing.

Just like what happened in the Fifties with the EuroDollar market, the City could take advantage of Brexit, slashing red-tape and establishing a “euro-euro” market.

In a recent report for the Spectator, economist Gerard Lyons explained that even if equivalence is “nice” to have, regulatory independence is “key”.

He wrote: “Even if you are negative about Brexit, London’s inherent characteristics are acknowledged as being Brexit-proof.

“These characteristics include English common law, time-zone, language, flexible workforce, its creative hubs as well as the skills, knowledge and experience based here.

“London has proved to be a good place to do business in, and from, hence its global appeal.

“Its regulatory environment is vital — as the Governor of the Bank of England made clear, the UK should not be a rule taker.

“In fact, it has the ability to make the most of its opportunity to diverge, if needed. At the same time, the UK will continue to help set the agenda at the global level, vital for the raft of firms in the City.”

He concluded: “In some respects, EU regulators are trying to create a walled garden.

“In all likelihood, if they pursue this further, then we may well see a repeat of the trend of half a century ago when tougher regulations in the US saw business flow to London with the growth of the euro-dollar market.

“This time, however, it may be the euro-euro market that blossoms in London, as the place clients wish to transact business.”

The EuroDollar market, which was established in the City of London in the Fifties, can be considered the progenitor of today’s global financial system.

The Eurodollar market was established in the City of London in the Fifties, (Image: GETTY)

It marked the beginning of a movement away from the restrictions placed by the Bretton Woods system on international capital movements, and a return to the liberal internationalism and laissez-faire order of the private and central bankers that ended with the collapse of the gold standard in 1931.

Professor Daniel Hodson, ex-chief executive of the London International Financial Futures and Options Exchange, echoed Mr Lyon’s comments in another report, in which he explained how a Euro-euro market would work.

He wrote: “The EuroDollar market was a combination of a US onshore restriction, an effective but market-sensitive regulatory regime in London, a tsunami of international demand and the generation and maintenance of liquidity in a key market.

“Now read across to recent developments in respect of one the world’s larger but weaker currencies, the euro.

“Official interbank payments are limited to a specific EU-based system, TARGET2, as are security transfers.

“Euro clearing is being onshored to the eurozone and therefore effectively separating out the massive cost, capital savings and associated liquidity of the multi-currency and product clearing available outside (notably in London).

“There is an increasing understanding of, and reaction to, the undercapitalisation of EU27 banks because of the rigid, apparently riskless, treatment of their holdings of EU27 government debt; Germany is self-evidently a different risk from Greece or Italy. The continent’s financial markets are fragmented, lacking in liquidity in important products, and are retail rather than wholesale customer-orientated.”

Prof Hodson added in his piece for CapX: “Contrast this to the post-Brexit City, opening its doors to all qualified comers through its Temporary Permission Regime, immediately attracting 1500 EEA-based firms to apply for City market access, a massive statement of support.

DON’T MISS:
Elon Musk blamed Brexit for Tesla plant snub but he may not be right [INSIGHT]
London urged to turn into ‘Singapore’ as EU ‘in breach of WTO’ [REVEALED]
Macron torn apart by French MEP after UK clinches vaccine [EXCLUSIVE]

“No doubt part of the draw is the prospect of regulatory realignment of the over-prescriptive and disproportionate regime previously imposed by the EU, dismantling the anti-competitive and liquidity-sapping aspects of recent measures such as MiFID II on security markets and Solvency II on insurance.

“What better way to greet their enterprise than the development of the euro-euro based on open and unrestricted currency, derivative, and securities markets, and following the lines and rationale of its predecessor, the EuroDollar.”

At the euro-euro’s root would be the City’s constant innovation, its global acclaimed fintech, its wealth of participants in its deep and liquid markets, its skilled and diverse workforce and supporting resources, the Professor noted.

He concluded: “Like the EuroDollar it would immediately command a global customer base, and similarly cement the City at the top of the global financial services industry.”

Criticising Brussels for not granting equivalence to the City of London, he wrote: “That decision will hurt the EU more than it hurts Britain, reducing the access of Continental firms to the world’s best money markets just when Europe needs to recapitalise.

“Britain, understanding that protectionist measures mainly hurt the places that impose them, has not been so foolish as to retaliate in kind.

“But we can’t stop the EU from self-harming.”

Lord Hannan added: “Many of our rules are still aimed at preventing the 2008 crash, rather than at facilitating future growth in fintech, green investment and digital trade.

“At the very least, we should make competitiveness an explicit part of the regulators’ mandate – certainly no less than stability, confidence or consumer protection. Other regulators, such as Singapore’s, take it for granted that boosting competitiveness is part of their role.”

He concluded in his piece for The Telegraph: “London has immense opportunities.

“Just as it benefitted from American protectionism a generation ago by establishing the EuroDollar market, so it now stands to gain from European short-sightedness.

“We might well see a ‘euro-euro’ market here as Continental institutions flee their own regulators. But these things won’t happen on their own. We need to adapt – and quickly.”