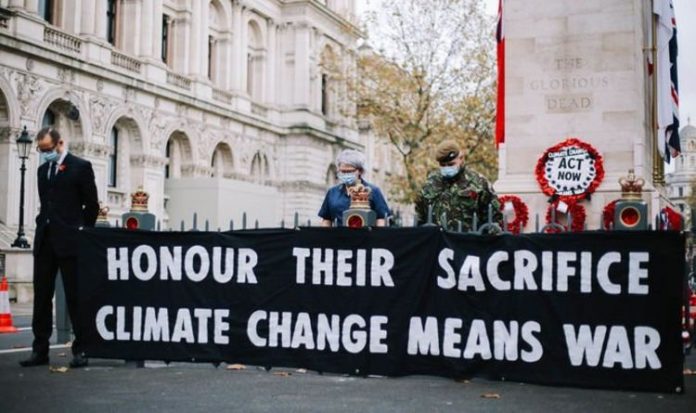 There was nothing remotely honourable about the shameful attempt to hijack one of the most hallowed rituals in our national calendar. On the contrary, this was an act of desecration, as contemptible as spraying graffiti on a graveyard headstone. In pursuit of its hardline environmental agenda, Extinction Rebellion has indulged in many puerile antics, such as digging up the lawn of Trinity College, Cambridge, or blocking roads in central London. But never before has this rabble of deluded activists descended to such depths of repugnant conduct.

The Cenotaph on Remembrance Day was completely the wrong target at the wrong time. Indeed, there could not be a less appropriate spot for political posturing.

Unveiled a century ago this week, the monument is not a symbol of an oppressive establishment, but a sacred tribute to the fallen. As the Daily Express put it on Armistice Day in 1920, “the Cenotaph belongs to the people. It is the shrine of their dead and a place of pious pilgrimage.”

That is why it should be cherished, not defiled for political ends. But the eco warriors have no respect for our heritage or understanding of our history.

The Extinction Rebellion mob are so consumed with their own shrill self-righteousness that they cannot let a solemn act of remembrance occur without a display of their supposed political virtue.

In its love of provoking outrage and disruption, Extinction Rebellion acts as if environmentalism is a forgotten cause. Just the opposite is true.

The fight against climate change is perhaps the top priority for governments across the Western world, as reflected in the drive to cut carbon emissions, promote renewable energies and impose green taxes.

But the Extinction hardliners ignore all that, exposing the reality that they are not true environmentalists at all but anarchic revolutionaries bent on the overthrow of our democratic systems which so many died to defend.

There also must be questions about the slow reaction of the authorities to this stunt. Why were these protesters allowed to unfurl a banner at the Cenotaph when nearly all veterans have been barred from attending Remembrance commemorations this week because of Covid?

One of their number, Donald Bell, is himself a veteran but that does not excuse his despicable behaviour. He says he wants to prevent future wars by promoting environmental concern but that is more self-serving nonsense.

It is not climate change that is likely to endanger peace and security, but the triumph of political extremism and the authorities’ surrender to mob rule.

The irony is that Bell had his gang have done a terrible disservice to the environmental cause, which is now tainted by the worst kind of crude gesture politics. Millions of Britons gave their lives for freedom.

They do not deserve to have their memory besmirched in this way.