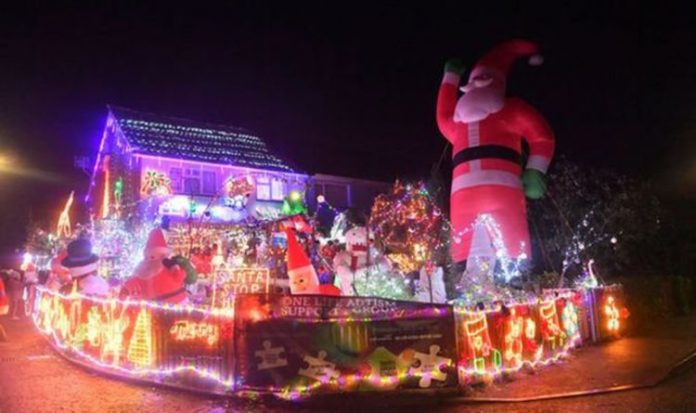 The house which is home to the Lucas family in the village of Govilon, near Abergavenny did not switch its lights on last night following the attacks. The family set the lights up in order to raise money for One Life Autism Support Group and have so far raised around £1,500.

Known to their neighbours as the Christmas House, the Lucases started getting ready 11 months ago when they planted 17 Christmas trees in their garden ready for festive celebrations.

They also built a log cabin for Santa as well as making room for the towering snowman now sitting in their garden.

And it’s all to raise money for a charity close to their heart after four family members were diagnosed with autism.

Darren Lucas, 54, told WalesOnline: “We have been planning it all year. We’ve been putting them up since October. We are on our fifth week at the moment and we’re not quite finished.

“In January we planted Christmas trees all around the garden – 17 of them. We built fences, we built a log cabin.

“People think we are mad but we want the garden to look like Christmas. People know us as the Christmas house.

“We didn’t realise how big it was until we started to light it all up. All year my son has been scouring the internet looking at America where he can find unusual things.”

However, according to Darren Lucas a minority of people have not been happy with the display, especially the number of people it has attracted.

“We have had members of the public abused and spat at, we have had people rowing with the residents. It is not everyone but a small minority,” he said.

Mr Lucas has also been subjected to online abuse and described messages he received about his family as “disgusting”.

He also said someone mocked his daughter who has autism because of the way she speaks.

He believes some residents have been upset by the volume of people visiting the street but insisted that cars visiting the display parked elsewhere and visits were done in a Covid-safe manner.

People were made to follow a one-way system and adults were asked to wear masks if visiting the lights.

As a result the family did not turn the lights on on Sunday evening and are discussing whether to remove the display all together.

“We just feel so sad we have worked all year to do this. All I want to do is get the message out there for autism awareness.”

They hoped they could move the display to a public place in Ebbw Vale but aren’t able to do so now due to Covid restrictions putting a ban on outdoor attractions.