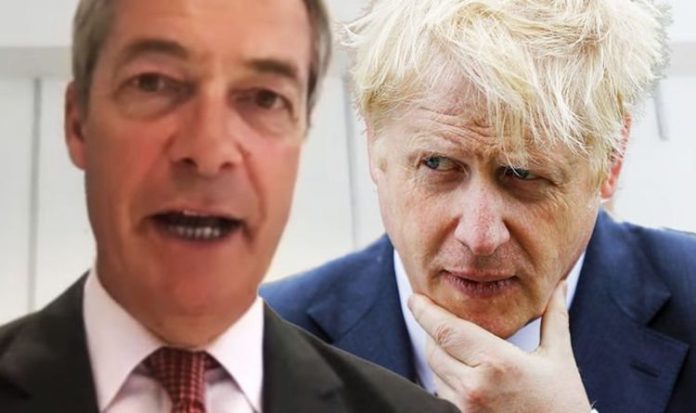 Brexit Party leader Nigel Farage claimed Boris Johnson and the Tories could betray the British people in the last weeks of the Brexit trade talks. While speaking to Jonathan Saxty of Brexit Watch, Mr Farage issued a chilling warning to the Prime Minister’s party. Mr Farage claimed that he and his Brexit Party would politically kill the Tory Party off for good if a Brexit betrayal occurred.

He said: “For Boris and his team to give into what Michel Barnier wants, it would be a breach of contract with the British people.

“It would also be a complete betrayal of Brexit and that support hanging by a thread would disappear.”

Mr Farage argued there would be severe political consequences for failing to uphold Brexit promises.

He said: “I did meet a Cabinet minister last week and I said to him if you mess this up we are going to come and kill you once again.

“There is something in me that says that the Tories basic sense of self-survival means they will not collapse to all of Michel Barnier’s demands.”

The Brexit Party leader also remarked how he has long remained a critic of the Brexit withdrawal bill and the difficulties it has now lead to.

Mr Farage said: “I kept thinking no the Brexit withdrawal bill is not wonderful, it is awful.

“But the British electorate voted for us not to be tied to those rules and that does supersede what was in the agreement.”

Mr Farage closed by making a prediction on how he believes the Brexit trade deal talks will conclude.

He said: “I suspect there will be a deal that is struck at the last minute.

“I suspect it won’t give all the things that I and the Brexit Party would want.

“But I suspect it won’t be so bad that it leaves such a big chink of daylight for others to come in.”