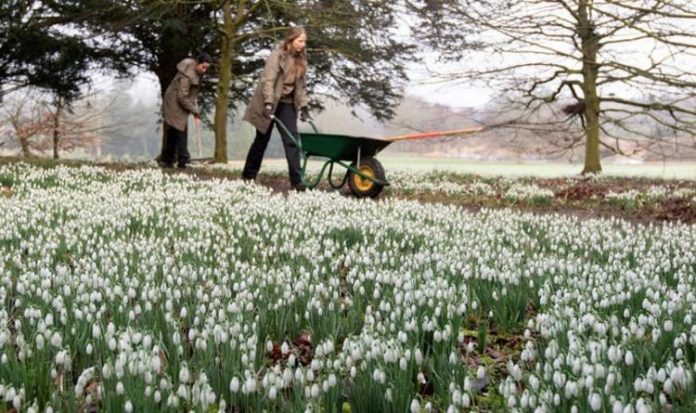 Temperatures will plummet over the weekend and into next week as icy winds arrive from Russia – together with heavy snow with up to 16 inches falling in places. The warning follows Wednesday night’s thaw in many regions worsening flooding. Parts of York city centre were swamped yesterday after the river Ouse burst its banks and Met Office flood alerts were in place for several rivers around Britain.

Weathermen warned that the arriving bitter easterly winds will keep temperatures hovering just above freezing – with the wind chill making it feel a shuddering -5C.

As the Met Office issued a yellow warning for the possibility of four days of snow across large parts of the country, the early sign of spring yesterday was snapped at English Heritage’s Audley End House in Saffron Walden, Essex.

Forecasters said high pressure would start to build to the north of Europe over the weekend.

By midweek, temperatures could drop even further, before the spell ends towards next weekend.

The first Beast from the East caused havoc in February and early March 2018, with schools closed and travel chaos.

Last night, a Met Office spokesman warned: “This set-up is similar to the Beast from the East from 2018.

“We have confidence that the high pressure system will develop and it will turn colder than normal.

“The coldest days will tend to be around midweek as the air from Russia finally arrives in force.

“The upcoming spell of weather, while disruptive for some, is not expected to be as cold as 2018, although there will still be a bitter wind chill.

“Many places in the east and north of the UK will see at least some snow, with parts of Scotland looking worst affected through Friday and Saturday.”

Meteorological experts say the cause of the second Beast from the East may be a sudden stratospheric warming event over the North Pole last month.

Bands of rain from England will meet icy winds from Russia to herald a repeat of the white-out conditions seen three years ago.

The teeth-chattering Siberian blast will arrive after recently released records showed that Britain has had the coldest January for 10 years.

However, none of this troubles businesswoman Alice Goodridge, 33, of Newtonmore in the Cairngorms.

Yesterday she was pictured with her trusty ice-breaking sledgehammer in hand, dipping into the waters of nearby Loch Insh.