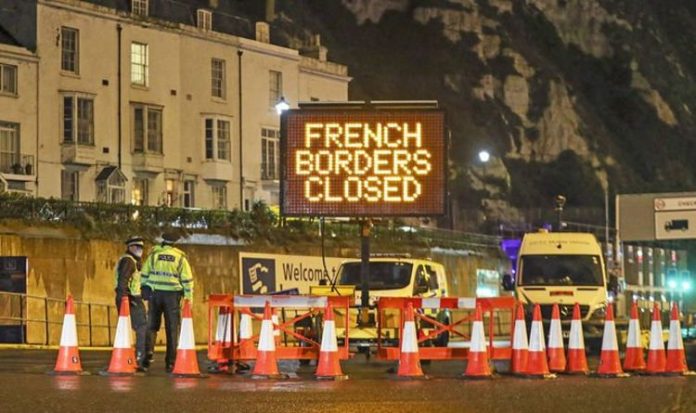 The news of a new coronavirus strain in parts of the UK has caused alarm globally. Several countries, including France, Germany, Italy, the Netherlands, Austria, Switzerland, Ireland, Belgium, Israel and Canada, have cut off travel routes to the UK as a result of the news. The port of Dover will be closed to traffic leaving the UK for the next 48 hour to comply with the temporary French ban on people travelling from the UK.

Queues of trucks are already stacked on the M20 motorway in Kent heading towards the ports.

A nearby airport will also be used to hold freight, as the Government has triggered plans it had for stacking up trucks in Kent when the UK leaves Brexit negotiations with the EU behind on December 31.

Freight from France to the UK will be permitted, but there are concerns drivers will get stuck in the UK.

The Prime Minister will meet with other ministers at the Government’s COBRA emergency committee later today to try and find solutions.

READ MORE: Dover and Eurotunnel shut: How long will the border be shut?

The French government has said that “in the next few hours” it will establish a “protocol to ensure that movement from the UK can resume”.

He wrote: “Following the French Government’s announcement it will not accept any passengers arriving from the UK for the next 48hrs, we’re asking the public & particularly hauliers not to travel to Kent ports or other routes to France. We expect significant disruption in the area.

“My department is urgently working with Highways England and Kent Council on contingency measures to minimise traffic disruption in the area. We will share more details on these shortly.”

“If nothing changes, we will start to see gaps over the coming days on lettuce, some salad leaves, cauliflowers, broccoli and citrus fruit – all of which are imported from the continent at this time of year.”

Sainsbury’s also called on the UK and French governments to come to “a mutually agreeable solution that prioritises the immediate passage of produce and any other food at the ports”.

Food for traditional Christmas dinners are available and already in supermarkets.

The block is also affecting export of goods, as shellfish producers in Scotland also said they had tonnes of perishable products stranded on roads due to the border closure.

Ministers have stated the current border closures will not affect shipments of Covid vaccines to the UK.

The Transport Secretary told Sky News the disruption around the Channel ports in Kent “won’t have an impact” on the vaccine supply.

Mr Shapps said: “Most vaccine doesn’t come via what is called ‘Ro-Ro’, roll-on, roll-off, which is what we are talking about here.

“In other words, it’s not usually accompanied by a driver, by a haulier. It comes on those containers.

“To put this into context, there are about 6,000 vehicles we would expect, just under in Dover today, probably 4,000 would have gone across from Dover, just under about 2,000 on the Eurotunnel.

“But there is probably something like 32,000 units that would have been the daily total, so the vast majority – including virtually all the vaccine – actually comes via container and there are good supplies in the meantime.

“So this won’t have an impact on the vaccination programme.”