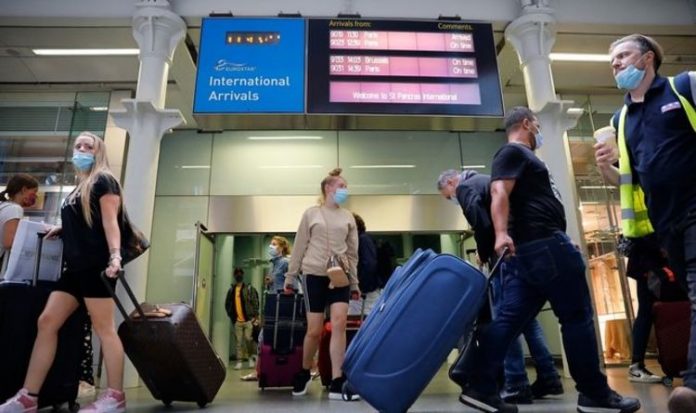 It follows the government’s announcement that anyone arriving into the UK from France will have to self-isolate for two weeks, effective 4am this morning. Demand to return to the UK was so high Eurotunnel trains sold out on Friday, while airlines hiked prices.

Transport Secretary Grant Shapps said on Friday morning there were roughly 160,000 UK residents on holiday in France at the time.

This week, Prime Minister Boris Johnson vowed to be “absolutely ruthless” about imposing quarantine measures on people arriving into the UK from certain countries.

It is linked to the UK’s ‘travel corridor’ policy, in which travellers from some countries are exempt from having to go into mandatory two-week quarantine upon arriving in the UK.

France was one such country, but on Thursday night it was confirmed the country’s exemption would be removed due to coronavirus fears.

The government said: “Data from France shows that over the past week (7 to 13 August) there has been a 66% increase in newly reported cases and a 52% increase in weekly incidence rate per 100,000 population, indicating a sharp rise in COVID-19.”

It meant any Britons holidaying in France when the changes were announced faced the prospect of two weeks in self-isolation.

The other option was to return home before the new policy came into place at 4am this morning.

This is what many families did, with one family telling the BBC they cut their holiday in Nice short by four days.

READ: France holidays: Do I have to self-isolate if I go to France

Business owner Tom Duffell said there was a “scramble” to book flights after the news broke on Thursday evening.

He said: “We’ve had to spend about £800 because we can’t afford to take another two weeks off work.”

Eurotunnel Le Shuttle – the service that ferries passengers in their cars underneath the channel, warned against people arriving at its European side to return back to the UK.

It said in a tweet yesterday morning: “Due to the recent Government announcement, our shuttles are now fully booked until tomorrow morning.

“There is no more ticket availability, and we are not selling tickets at check-in. Please do not arrive at the terminal unless you have a ticket valid for travel today.”

As well as France, the new measures also apply to anyone arriving into the UK from the Netherlands, Monaco, Malta, Turks and Caicos, and Aruba.

France said it would take “reciprocal measures” in response to the government’s move.

Mr Shapps said yesterday: “The last thing we want to do is to have people returning and bringing the infection with them.”

Anyone abiding by the self-isolation rule is not allowed to leave the place they are staying in the UK for 14 days – though they can use public transport to get there if there is no other option.

The government also says anyone self-isolating “should not go shopping” – instead, it advises people to order food in, ask a friend or relative, or ask an NHS Volunteer Responder on 0808 196 3646.

Anyone refusing to self-isolate upon their return to the UK will face a fine of up to £1,000, or further action; though the penalties differ between England, Wales, Scotland and Northern Ireland.