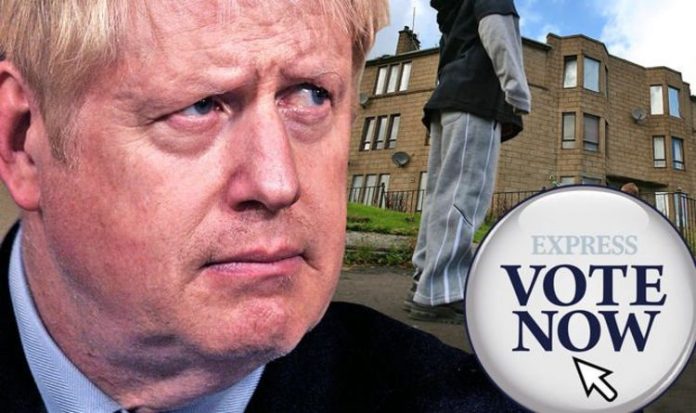 Last week, Conservative MPs voted against a motion tabled by Labour in the House of Commons to extend free school meals, with five Tory MPs rebelling and voting for the Opposition’s proposal. The Government performed a dramatic U-turn earlier this year when it extended free school meals to eligible children during the Easter holidays and did the same for the lengthy summer holiday period following a high-profile campaign by Manchester United and England footballer Marcus Rashford. But Downing Street is refusing to repeat the move, with ministers insisting they will not fund free school meals for vulnerable children in England over the half term holidays.

The Prime Minister is now facing growing pressure from former ministers and several Conservative MPs to reverse the decision.

Labour leader sir Keir Starmer has promised the party will do everything possible to force a new vote on the issue in Parliament if the Government does not change its position before the Christmas Commons recess.

Rashford has launched a petition calling for provision of free school meals to continue in the holidays, which had gained nearly 870,000 signatures by Monday morning.

Many councils throughout England are providing meals vouchers, while hundreds of businesses are offering parcels to those in need.

Scotland, Wales and Northern Ireland have already introduced their own food voucher schemes.

But Health Secretary Matt Hancock has defended the move to not fund free school meals for vulnerable children in England over the holidays, insisting providing help through councils was “the best way to do this”.

When asked on Sky News about the campaign from Rashford, who received an MBE for his campaigning, he said: “I think we’re all inspired by the way that he’s led that campaign.

“And the purpose is that no child should go hungry, and that’s right.

“The question is how we then fulfil that, and so I think that there is a need during this pandemic, and at all times, for the country to come together and to support people and that’s what we’re doing putting that investment in.”

Mr Hancock insisted the Government has put a “huge” amount of additional investment to support people during the coronavirus pandemic and referred to “an extra £20 a week into Universal Credit”.

He replied: “Well, I accept and I strongly believe that we should all come together to ensure that no child should go hungry.

Free school meals: Keir Starmer said Labour will force a new vote on the issue in Parliament if the Government does not change its position before the Christmas Commons recess (Image: GETTY)

“That’s the central insight behind what Marcus Rashford is arguing for, and I think he’s making the case just with such strong eloquence and speaking authentically from personal experience, and I think that’s something that we should all get behind.”

He added: “I think that working together with central government providing funding, which we’ve done, the councils often know on the ground how best to get to the children who need support most and people as individuals.”

When asked on BBC Breakfast whether Mr Johnson has responded to a letter from Rashford on the ongoing issue, he replied: “There has been communication between the two, as far as I understand it.

“I’m sure that will be followed up”.

The campaign from Rashford has led businesses including fish and chip shops, pubs, restaurants and cafes promise to provide free food to eligible children over half term.

Conservative-led Bournemouth, Christchurch and Poole Council has pledged to hand out food parcels for families from today (Monday), while also tweeting: “No child should go hungry.”

Kensington and Chelsea Council, which is also run by the Tories, has said nearly 3,300 youngsters would receive vouchers worth £15 from their schools to cover the cost of meals during the half term holidays.