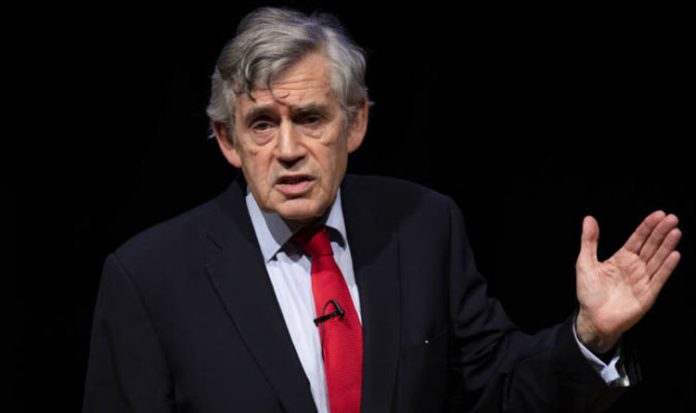 In a powerful speech at a Labour Jewish Movement conference Mr Brown hit out at the “conspiracy theorist Left” who support Mr Corbyn and have taken over the party.

He called for Labour to “unanimously, unequivocally and immediately” adopt the internationally agreed definition of anti-Semitism.

The former prime minister made the plea ahead of a meeting this week of Labour’s ruling National Executive Committee on whether to adopt the International Holocaust Remembrance Alliance declaration.

Mr Brown said it was not simply about a change in policy but was “about the soul of the Labour Party”.

He told the Jewish Labour Movement conference in Finchley, north-west London: “I believe that the Labour Party will change the policy.

I believe that the Labour Party must and should change the policy.

“And I believe this problem must be solved within the Labour Party now.”

Mr Brown’s speech received a standing ovation as he outlined growing antiSemitism among not only the “jackbooted” Right, but also the “conspiracy theorist” Left.

“This is a problem that is real and present and something that’s got to be dealt with now,” he said.

“The IHRA definition of antiSemitism is something we should support unanimously, unequivocally and immediately.”

Mr Brown said the definition, which has been signed by 31 countries, states that criticism of Israel cannot be regarded as anti-Semitic.

He added: “The declaration is about this and this only – to condemn and root out, as they state, anti-Semitism, which ‘is a certain perception of Jews, which may be expressed as hatred toward Jews’. This declaration is needed now, urgently.”

The intervention came amid reports a group of Labour MPs were planning a vote of no confidence in Mr Corbyn over antiSemitism.

Speaking on the BBC’s Andrew Marr Show yesterday, Lord Sacks said: “Jews have been in Britain since 1656, I know of no other occasion when Jews – the majority of the community – are asking ‘is this country safe to bring up our children?

“There is danger Jeremy Corbyn may one day be prime minister. I’m afraid that until he expresses clear remorse for what he has said and what his party has done to its Jewish sympathisers and Jewish MPs, then he is as great a danger as Enoch Powell was.”

Shadow Chancellor John McDonnell said: “Jeremy’s made it clear we will protect Jewish members of our party from any form of abuse and anti-Semitism.”