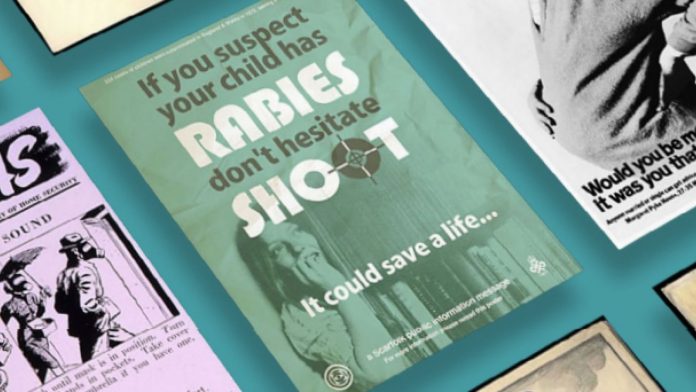 The civil service made an eye-popping error after accidentally publishing a satirical poster encouraging parents to shoot their children if they suspect they have contracted rabies.

The current issue of Civil Service Quarterly features the poster – produced by the fictional council of Scarfolk – on page 20.

The department declined to comment on the incident when contacted by Sky News, but said a statement might be published “today or tomorrow”.

Wow. This has made my week. This is from the government’s *own* publication about the history of government communications. They mistakenly included a Scarfolk poster which encourages the killing of children. Clearly, nobody thought it was too extreme. (via @CraigHeap) pic.twitter.com/PITafePTKe

The fictional town of Scarfolk was created by writer and designer Richard Littler as “a dystopian satire of the 1970s that somehow leaks into and reflects on current affairs”.

It has developed a cult following for its Ballardian exploration of the 1970s, and a suburbanised idea of totalitarianism, pagan ritual, and Scarfolk Council’s comical obsession with keeping rabies at bay.

Despite being ostensibly in North West England (circa 1979), Scarfolk is primarily an online creation – although as its cult following grows it is increasingly featuring in other media.

Mr Littler told Sky News he had “no idea” how the poster ended up in the magazine, although added: “I’d like to think a Scarfolk fan and/or cult member infiltrated the civil service – as my book predicts!”

The town of Scarfolk has been explored in two books, Discovering Scarfolk, and the forthcoming Scarfolk Annual. A television development co-written by Will Smith, who also wrote The Thick of It and Veep, is in the works.

Mr Littler said he created Scarfolk “partly because, as a Brit abroad who is not allowed to vote in UK affairs, I feel the need to have some kind of say”.

“That’s the serious bit, but it’s also just for the sake of being silly,” he told Sky News. I also do it because I’m trying to reassess/investigate the 1970s, which for kids of the period, was a very weird time. Everything was strange and absurd.”