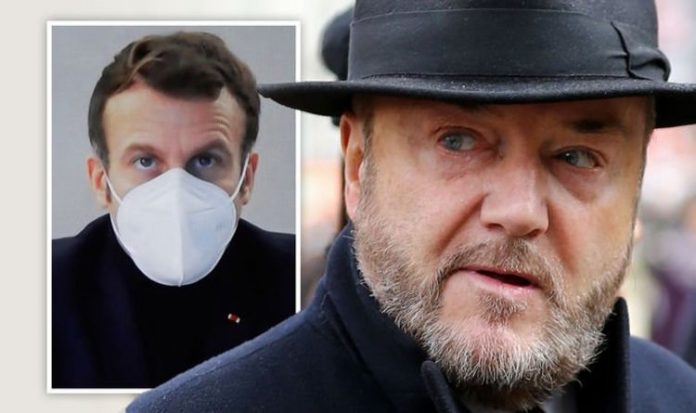 The Scottish politician, broadcaster and writer tweeted: “When Netherlands, Belgium, and France folded like a cheap tent before Hitler’s Blitzkreig we were for a time left standing alone. The Fascists were at the Channel Ports and the founders of the SNP were collaborating with the enemy. London’s burning I don’t care’ wrote their Poet.”

Scottish poet Hugh MacDiarmid penned the lines that Mr Galloway has referred to, and is considered a champion of the Scottish independence movement, as he helped found the Scottish Nationalist Party.

One of the poet’s letters from the early 1940s was discovered where he wrote: “On balance, I regard the Axis powers, though more violently evil for the time being, less dangerous than our own government in the long run and indistinguishable in purpose.”

Mr Galloway’s wrath has also been directed north of the border to Nicola Sturgeon’s Government in Hollyrood that has implemented a strict travel ban preventing people from travelling over the Scottish border.

In defiance, Mr Galloway claimed on Twitter he would “cross the border on Monday”.

He added: “Sturgeon won’t stop me.”

Mr Galloway was supported in his attack on the EU nations that have imposed the latest UK travel ban by one of his Twitter followers who said, “the EU is trying to blackmail us by stopping trade under the guise of coronavirus, whilst the SNP acolytes rub their nationalistic hands with glee.”

However, a Twitter follower of Mr Galloway reminded him, “the UK did not stand ‘alone’.

“Canada and other commonwealth countries stood with you from the start.

The Port of Dover has today said the ferry terminal will be closed to all traffic leaving the UK.

France has claimed the new restrictions are due to the discovery of a mutation of the original pure-strain of the coronavirus.

This deadly new variant of coronavirus has been found to be much more easily spread.

Industry leaders from the trade and transportation sectors have signalled deep concerns that the ban imposed by Paris will have a dangerous disruptive effect on food and goods supply chains across the UK.

France has followed Germany, Italy, Belgium, and the Netherlands by imposing a temporary travel ban on movement from the UK amid fears over the new coronavirus strain.

However, the faster-spreading mutation of coronavirus that was found in the UK has also been responsible for at least one case in the Netherlands.

This has lead to fears that the new strain has already spread to the continent.

A Government spokesperson has said Prime Minister Boris Johnson has called for a meeting of COBRA to “discuss the situation regarding international travel”.

The spokesperson said an immediate concern was ensuring the “steady flow of freight into and out of the UK”.