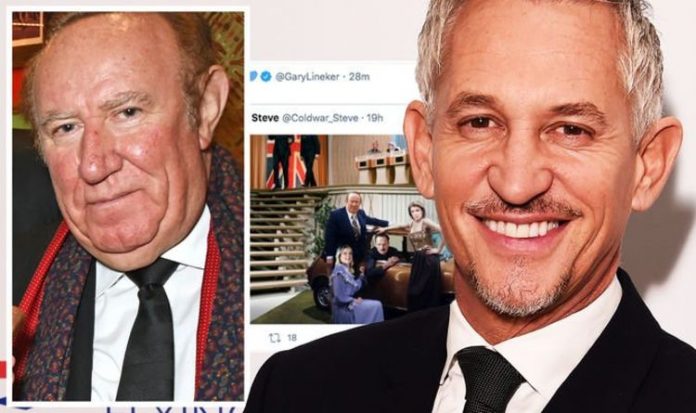 Andrew Neil says he ‘will not broadcast hate’ on GB News

The outspoken BBC presenter took to social media to poke fun at the channel, which is set to be the biggest news channel launch for 30 years. In a picture posted on Twitter showing Andrew Neil, Nigel Farage and Julia Hartley-Brewer, Lineker posted a laughing emoji much to the delight of his followers. Ahead of the channel’s launch, Mr Neil has vowed to set out an “anti-woke” vision for the news channel after witnessing broadcasters become entrenched with Remainers and left-wing liberals.

Describing his hopes for the channel, Mr Neil wrote for Express.co.uk, claiming the news direction in Britain has become out of touch with the majority of its people.

He said: “I believe our national conversation has become too metropolitan, too southern and too middle-class.

“Some journalists and commentators seem too confident that their liberal-left assumptions must surely be shared by every sensible person in the land.

“But many of those same sensible people are fed up. They feel left out and unheard.

Gary Lineker commented on the picture of the personalities (Image: Getty/Twitter)

“There’s a restlessness, a sense that they’re being talked down to; that much of the media no longer reflects their values or shares their concerns.”

The launch of the channel will come as serious competition to the BBC, who in an announcement this week, revealed the TV licence will increase from £157.50 to £159.

The rise will come into place from April 1 and will come at a time when the broadcaster has come under scrutiny for removing the free TV licence for the over-75s last year.

Poking fun at the rise in the licence fee when certain stars, such as himself, have taken pay cuts, Lineker sparked outrage from users on social media.

JUST IN: Brexit blunder as UK agreed to law behind ‘shellfish ban’ in 2008

Commenting on the story, he said: “But, but I’ve just taken a pay cut.”

However, many were quick to hit out at the joke at a time when many are experiencing financial hardship.

One person said: “In these desperate times, where a lot of people are struggling financially and mentally, your timing isn’t great Gary.”

A third said: “Usually like most of the stuff you tweet big man but you’ve misjudged the mood of the majority of people with this one.”

Another said: “I think this tweet is so self-absorbed, but it perfectly illustrates why we are still in lockdown while millions suffer.

“Celebrities, the Media and MPs preach to us and want lockdown, but don’t understand what people are going through.”

There has been fierce defiance over the rise in the BBC’s TV licence with some figures reporting many over-75s will refuse to pay the fee.

Not paying the licence fee comes with the threat of a £1,000 fine and could possibly result in a jail sentence for those who refuse the penalty.

Culture Secretary Oliver Dowden has called on the broadcaster to switch to a civil enforcement system.

However, in an Ofcom conference, director-general Tim Davie said the TV licence was the best way to fund the broadcaster.

He said: “I haven’t seen a model that beats the current one at the moment, a universally funded licence fee.

“That’s what the BBC needs to focus on. Under my leadership, we’ll focus on that.”