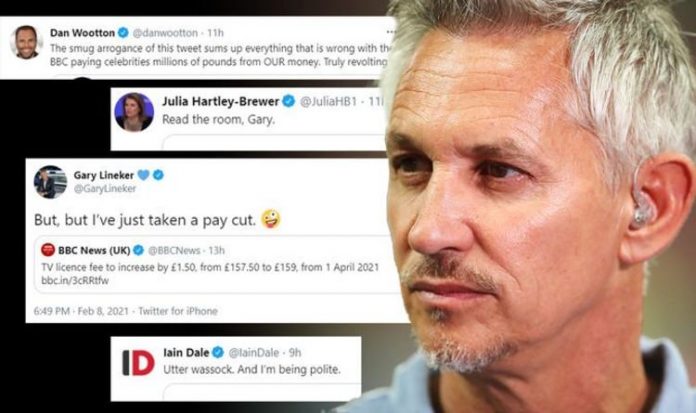 The Match of the Day host, who was the BBC’s highest earner in the 2019/20 financial year with an eyewatering £1.75million salary, took to Twitter after it was announced the annual licence fee will increase by £1.50 from £157.50 to £159 from April 1. Mr Lineker posted a grinning emoji with one eye larger than the other and wrote: “But, but I’ve just taken a pay cut.”

However the former footballer’s tweet prompted an outcry from other Twitter users who told him to “read the room”.

Conservative commentator Darren Grimes blasted: “The contempt for those struggling to fund the BBC as he luxuriates in his millions and pontificates on Twitter is palpable.

“Boasting that he isn’t the problem, as the sum his employer extracts from single mothers, pensioners and the newly unemployed goes up. Read the room, Gary!”

Journalist Dan Wootton fumed: “The smug arrogance of this tweet sums up everything that is wrong with the BBC paying celebrities millions of pounds from OUR money. Truly revolting.”

Another Twitter user said: “All the confirmation you need you should cancel your tv licence. Well played Gary.”

Last September it was revealed that Mr Lineker had agreed a £400,000 pay cut with the BBC.

His tweet on Monday came after it was announced the cost of the TV licence was going up.

Those buying or renewing a licence after April 1 2021 will pay the new fee.

Those already buying a licence on an instalment scheme which started before that date, such as via a monthly direct debit or weekly cash payments, will continue to make payments totalling £157.50 until their licence comes up for renewal.

The new cost equates to 43p per day, according to the broadcaster.

The licence fee model has come under criticism recently amid competition from streaming services such as Netflix.

And the abolition of free TV licences for all over-75s prompted a major backlash.

Campaign group Defund the BBC has amassed nearly 100,000 followers on Twitter since it was launched last June.