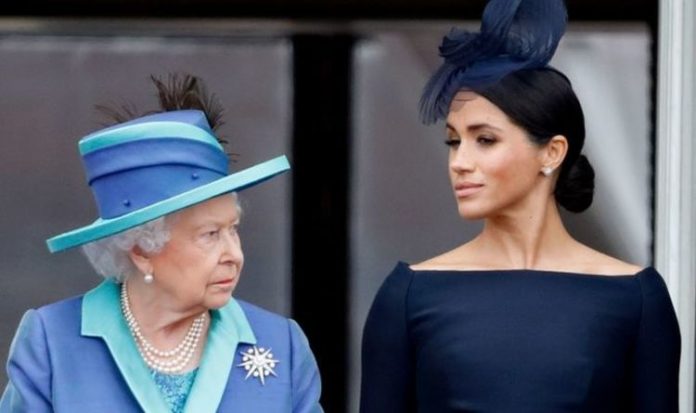 Meghan Markle has been heavily criticised by royal commentators for speaking openly about political matters, particularly in the lead up to the 2020 US Presidential election. Fans of the Duchess are now calling for immediate action to be taken against the Queen and other royals, after it was claimed the Firm has vetted more than 1,000 laws via a royal parliamentary procedure.

The Queen and Prince Charles have together vetted more than 1,000 laws through a parliamentary procedure called Queen’s consent, which has led to the royals privately lobbying for changes in laws, according to the Guardian.

The newspaper reported at least 1,062 parliamentary bills have been subjected to Queen’s consent over the monarch’s 68-year reign.

The parliamentary procedure has been used on a wide variety of laws, including those relating to social security, pensions, food policy and car parking charges.

Queen’s consent sees Government ministers privately notify the Queen of clauses in draft parliamentary bills and ask for her consent to debate them.

Meghan Markle fans have responded furiously to the claims the Queen has vetted over 1,000 laws (Image: Getty)

The Queen and Prince Charles have together vetted more than 1,000 laws through a parliamentary procedure called Queen’s consent (Image: Getty)

The newspaper states it has evidence the Queen lobbied for changes to at least four draft laws, including one that allowed the monarch to conceal her private wealth.

Meghan Markle fans have responded to the news with fury, with many asking for firm action to be taken against the monarch.

Royal commentator Omid Scobie, who co-authored a book about the Sussexes, said: “Fascinating @guardian investigation revealing how the Queen lobbied the British Government to change a draft law to conceal her private wealth from the public.

“We often hear how royals are not supposed to meddle in parliament but this tells a different story.”

Another person said: “What’s that thing Brits were saying to Prince Harry and Meghan about wading into Politics? I forget…”

JUST IN: Prince Charles could use Royal ‘hidden gem’ to fill Sussexes’ shoes

Meghan Markle fans have leaped to her defence (Image: Getty)

Another user wrote: “But Meghan talking to citizens of America to be active participants in the process that affects them was a bad thing! Whereas this Queen and her son are deeply involved in politics!”

A third said: “When it comes to Meghan and Harry the carnival of experts scream royals don’t involve themselves in politics, that it is hypocrisy for royals to expect ‘privacy’ can someone please explain what in the double standards is going on.”

One user even called for the Queen to be stripped of her royal titles, something royal experts have demanded happens to the Duke and Duchess of Sussex for their perceived political interference, signing of commercial contracts and for quitting the Firm.

The Twitter user said: “STRIP ELIZABETH OF HER TITLES FOR NOT REMAINING NEUTRAL IN THE LAW MAKING PROCESS THUS INTERFERING IN POLITICS WHICH checks many articles about Meghan and Harry reminding people to exercise their right to vote MEMBERS OF THE ROYAL FAMILY DONT DO!!”

Another user said: “Wait, I thought royals aren’t supposed to get involved in politics or something or is that only for people named Meghan.”

Last September the Duchess was heavily criticised for urging the American people to vote in the “most important election of our lifetime”.

Prince Harry appeared alongside her in the Time100 video, and urged American voters to “reject hate speech, misinformation and online negativity” in the US election.

The couple were accused of breaking UK protocol demanding political neutrality from members of the Royal Family.

A spokesperson for the Queen said: “Whether Queen’s consent is required is decided by parliament, independently from the royal household, in matters that would affect crown interests, including personal property and personal interests of the monarch.

She added: “Queen’s consent is a parliamentary process, with the role of sovereign purely formal. Consent is always granted by the monarch where requested by government. Any assertion that the sovereign has blocked legislation is simply incorrect.”

The Cabinet Office said: “Queen’s consent is a longstanding convention and a requirement of the parliamentary process. Consent is routinely sought by the government and agreed by the monarch as a matter of course.”