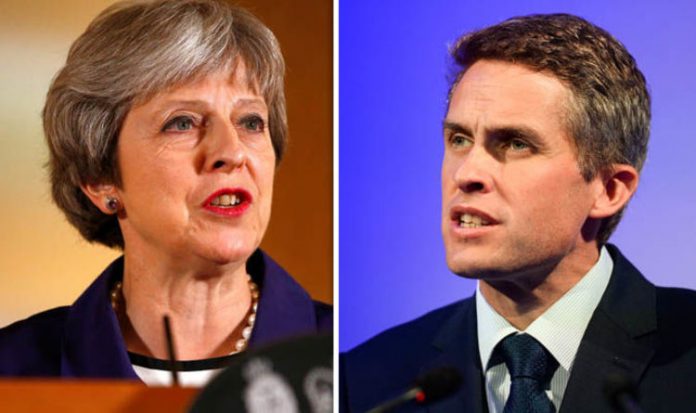 The Cabinet minister has criticised Mrs May and Mr Hammond in a letter to Downing Street, where he claimed they took the “wrong decision” by snubbing an official recommendation on giving members of the Armed Forces a pay rise.

In a warning that is set to further stir tensions within the Cabinet amid a fierce battle over the defence budget, the Mr Williamson reminded them the Government’s independent Armed Forces Pay Review Body suggested a 2.9 percent increase.

But Downing Street, despite Mr Williamson’s “favour” over the rise, only approved a 2 percent increase, worth £680 to an average soldier, and a further 0.9 percent one-off bonus, that will drop after next year.

Mr Williamson told the Prime Minister and the Chancellor their concession was not enough.

The letter, sent by a senior Ministry of Defence official to No 10 last week, said: “As you will be aware, the Armed Forces Pay Review Body recommended a uniform 2.9 per cent consolidated pay award to military personnel in full.

“The Defence Secretary was, for the reasons set out in his letters of June 18, June 26 and July 19, strongly in favour of this.

“However, the Prime Minister and Chancellor have decided that the Armed Forces should receive a 2.0 per cent consolidated pay rise and a 0.9 per cent non-consolidated payment.

“The Defence Secretary continues to be of the view that this is the wrong decision.

“The Ministry of Defence will now undertake the requisite actions to formalise this decision and ensure that our hard-working Armed Forces receive their pay award as soon as possible.”

Home Secretary Sajid Javid has expressed concerns similar to Mr Williamson’s over the 2 percent rise for police officers announced last week, according to The Telegraph.

Mr Javid had previously pushed for a total increase of 3 percent, which would be in line with recommendation made by the body reviewing police pay, the Police Remuneration Review Body (PRRB).

A senior government source told the newspaper the announcements were agreed by Mr Williamson and Mr Javid.

A defence source explained: “Because the Armed Forces do not have a trade union, the Secretary of State felt he was duty bound to push as hard as he could on their behalf.

“The Treasury originally wanted to give them just 1.5 percent.

“He fought their corner hard then managed to get them a better deal than was originally offered. He was content to settle with that.”

A 10 Downing Street spokeswoman told Express.co.uk they would not comment on this.