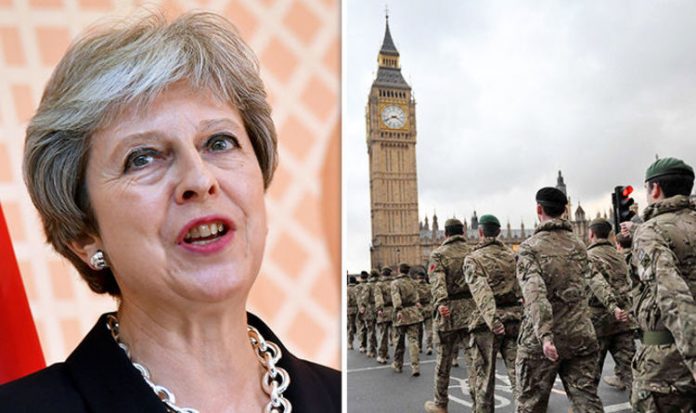 Troops would be called in to deliver vital supplies to vulnerable people, under shock plans being drawn up by ministers.

They fear a no-deal Brexit could spark blockages at UK ports, leading to shortages of essential goods after the UK leaves the bloc.

Blueprints usually reserved for civil emergencies have been included as part of the Whitehall preparations, according to reports.

Helicopters and army trucks could be used to carry medicine to people outside the south-east, the documents show.

The revelations have sparked fresh claims from pro-Leave campaigners that the Government is scare-mongering over Brexit.

He said: “The idea that not enough food will get through to feed ourselves is totally and utterly incredible.”

But a minister told the Sunday Times: “There is a lot of civil contingency planning around the prospect of no deal.

“That’s not frightening the horses, that’s just being utterly realistic.”

“Pro-Brexit Ministers are drawing up blueprints for the army to deliver food, fuel and medicine if we leave the EU with no deal.

“We have a duty to prevent this self-immolation.”

A Ministry of Defence source said there had been “no formal request” from the Government to supply aid.

However, they admitted the department has “a blueprint for us supporting the civilian authorities that can be dusted off”.

Theresa May last week refused to deny the Government was stockpiling food and medicine in the event of a no-deal Brexit.

The Prime Minister said people “should take reassurance and comfort” from the contingency plans.

She added: “We don’t know what the outcome of Brexit is going to be, we think it’s going to be a good one.

Meanwhile, Brexit Secretary Dominic Raab insisted the UK would not suffer from a shortage of food.

He told MPs on Tuesday: “We will look at this issue in the round and make sure that there’s adequate food supplies.

“It would be wrong to describe it as the Government doing the stockpiling.

“Of course the idea that we only get food imports into this country from one continent is not appropriate.”