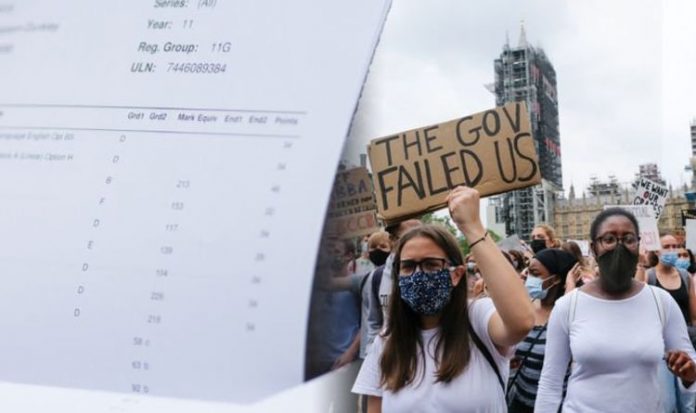 Results day is a stressful experience at the best of times, but with the inability to take exams during lockdown, anxious students have been awaiting grades based on mock exams, coursework, teachers marks and an algorithm. The algorithm saw results produced by combining the ranking of pupils with the share of grades expected in their school.

However, there has been outrage as nearly 40 percent of A-level grades announced last Thursday were lower than the teacher’s predictions.

This has led to widespread anger with students denied first-choice university places or lost out on employment or further education opportunities.

Now many are waiting to find out if they can appeal.

In central London on Sunday, hundreds of students held a demonstration to demand clarity over the appeals procedure.

Now GCSE results are expected to be announced this coming Thursday, and the Prime Minister is being urged to delay results for fears of a repeat of last week’s chaos.

Prime Minister Boris Johnson is facing mounting pressure to intervene in the exams crisis across England and delay GCSE results.

The same algorithm which has been slammed by political figures, school heads and students alike is being used to calculate Thursday’s GCSE results.

This has sparked fears millions of school leavers will face downgraded results as they try and get onto college, sixth form and further education courses.

This means from 8am on Thursday, August 20, students will be able to collect their results from school or college.

Some schools will release results via an online portal.

Express.co.uk will update this page with more information as and when it is available.

GSCE students in Northern Ireland are to be awarded the grades predicted by their teachers, Stormont’s Education Minister Peter Weir has announced.

Just days before the results are published, Mr Weir has scrapped a plan which would have had grades calculated using a mathematical model which took into account the past performance of schools.

Mr Weir said his decision would not delay the publication of grades on Thursday.

He said: “Having received advice from CCEA and listened to the concerns of school leaders, teachers, parents and young people, I have decided that all GCSE candidates will now be awarded the grades submitted by their centre.”

Tory MP Stephen Hammond suggested delaying GCSE results day in England is “probably is the right thing to do”.

He told Sky News: “I am increasingly thinking that Lord Baker is probably correct.

“Unless Ofqual can ensure that what they’re going to put in place is transparent, certain and is likely to reflect true ability…

“I think one would have expected them to have had that sorted out by now, but if it’s not, taking another two weeks or another week to get that right rather than causing stress – that so much has been caused to young people who have taken A-levels this year – would be something that we should certainly consider, and probably is the right thing to do.”

Asked whether he has full confidence in Education Secretary Gavin Williamson, Mr Hammond said: “Gavin Williamson needs to spend today working with Ofqual and get this sorted out.

“As I said, we can play the blame game in the future. Clearly, there are a number of my colleagues who are deeply frustrated and you’ve heard them say what they have to say.

“But what I’m looking to do is, for my constituents and for thousands of young people across the country, give them a chance to have in place a process that is fair, that is simple to understand and should be resolved quickly.”

The Department for Education (DfE) has said it is continuing to work with the regulator Ofqual to build as much “fairness into the appeals process as possible” to help what it described as the “most difficult cases”.

A DfE spokesman said in a statement issued late on Sunday: “Ofqual continues to consider how to best deliver the appeals process to give schools and pupils the clarity they need.”