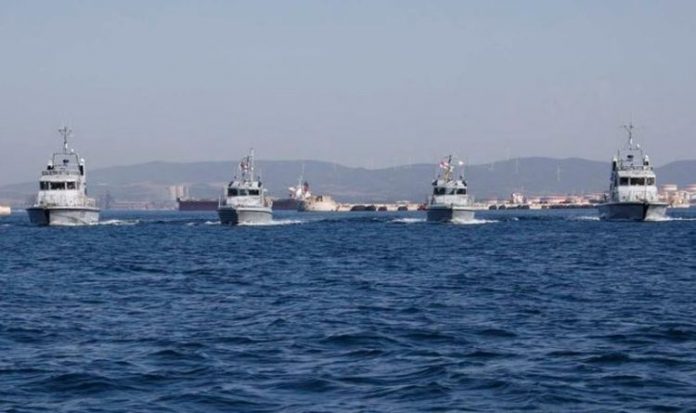 Picardo: Nothing will cleave Gibraltar from the UK

The Strategic Command of the Armed Forces of the United Kingdom recorded 37 overflights of the Spanish Air Force and 27 intrusions of Spanish Navy ships throughout the year. The remaining incursions were carried out by the Spanish Civil Guard or customs officers.

Britain records any incidents they consider to be Spanish incursions in the waters and airspace belonging to Gibraltar.

Spain does not recognise such incidents because maritime territory or airspace restrictions were not included in the historic Treaty of Utrecht which gave Britain sovereignty over the Rock in 1713.

The figures were released by defence chiefs after a Freedom Of Information (FOI) request by a resident of Gibraltar and were first published by the Confidencial Digital newspaper.

Navy warships on patrol off the coast off Gibraltar (Image: MOD)

British Armed Forces Strategic Command said its figures were based on “incursions” into the “British Territorial Waters of Gibraltar” as defined in the UN Convention on the Law of the Sea, which occurred between January 1 and December 31 2020.

The response indicated there were 704 Spanish maritime incursions” during that period with 27 involving Spanish naval vessels.

The remaining 677 were carried out by “other agencies of the Spanish government” – a category that includes Spanish Customs and Civil Guard officials who often chase drug traffickers and smugglers through the Bay of Algeciras and pass through Gibraltarian waters.

UK Strategic Command reported an additional 126 incidents of air incursions by Spain recorded by the RAF in 2020.

Of that figure, 37 were carried out by Spanish Air Force or other Spanish military aircraft while 74 would be from other agencies of the Government of Spain. The remaining 15 were probably linked to civil aircraft.

The Gibraltar government usually asks the UK authorities to lodge diplomatic complaints for every occasion Spanish ships, planes or helicopters are detected to have entered the waters or airspace they claim as its own without permission.

The FOI figures come at a sensitive time for UK-Spanish relations over Gibraltar in the wake of Britain’s departure from the UK.

Spanish Minister of Foreign Affairs, EU and Cooperation Arancha González Laya has made clear the country has not renounced the “sovereignty” nor the “co-sovereignty” of Gibraltar after Brexit.

She issued the warning during a reply to parliamentary groups before the Joint Commission of the European Union of the Congress of Deputies when explaining the principle of the agreement between Spain and the UK over Gibraltar.

The Spanish diplomacy head has come under pressure from rival political parties about the “lost opportunity” to regain the sovereignty of Gibraltar by taking advantage of Brexit.

The minister had previously said the principle agreement reached with the UK over the Rock following Brexit would allow Spain to “regain control” in matters related to Gibraltar.

After responding to “legitimate demands” of the Campo de Gibraltar and observing that “we went from word of mouth to facts”, Ms González Laya claimed: “We regain control in this area of maximum strategic importance for our country.”

The Foreign Minister insisted there are “ambitious” objectives in regulatory and fiscal matters to end “distortions”.

She continued to defend the agreement between Spain and the UK on Gibraltar, highlighting the new scenario that presents itself without impacting the “inalienable historical claim” on the Rock.

Ms González Laya said: “For the first time in 300 years, Spain regains prominence in Gibraltar’s affairs and takes the initiative with a clear plan for the future of the Campo de Gibraltar and the Strait area.”