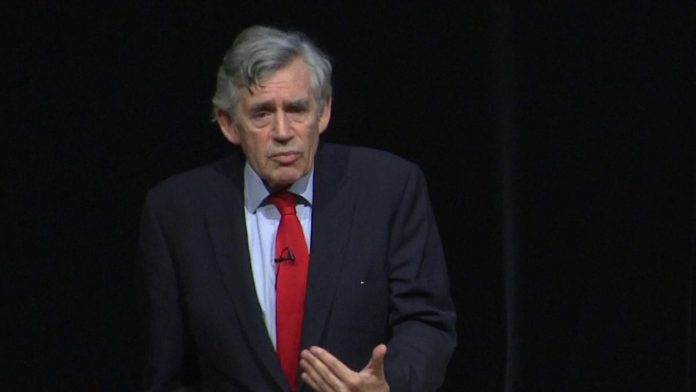 Gordon Brown has said the Labour Party must adopt the IHRA definition of anti-Semitism in full, saying it would be a “stain removed”.

The former prime minister called for a comprehensive strategy against anti-Semitism in a London speech, saying it was “not just a procedural issue but about the soul of the party”.

“It is time to say that this wrong must and can be righted,” he said. “This injustice had got to be remedied, this stain must be removed, the sore that exists and the harm that has been done, and the hurt it has caused, has got to be undone.”

He made the speech in advance of a meeting by Labour’s National Executive Committee over whether to adapt the IHRA definition, and hours after rabbi Lord Sacks launched a renewed attack on Jeremy Corbyn over anti-Semitism.

The former chief rabbi told Andrew Marr that, unless he “expresses clear remorse” for comments made about British Zionists in 2013, the Labour leader posed “as great a danger as Enoch Powell”.

“Jews have been in Britain since 1656, I know of no other occasion in these 362 years when Jews – the majority of our community – are asking ‘is this country safe to bring up our children’,” he said.

“Anyone who uses the term Zionist loosely, without great care, is in danger of engulfing Britain in the kind of flames of hatred that have reappeared throughout Europe, and is massively irresponsible.”

He said believed “all sides would be satisfied” with Labour’s planned proposals for a new definition and that the party would “resolve this matter” and “move on”.

“I think when you sit down with Jeremy you will find you are virtually on the same page on many of these issues,” he said.

“You’ll be able to work together to tackle this issue of anti-Semitism in our society, which we acknowledge exists and we’ve got to tackle together.”