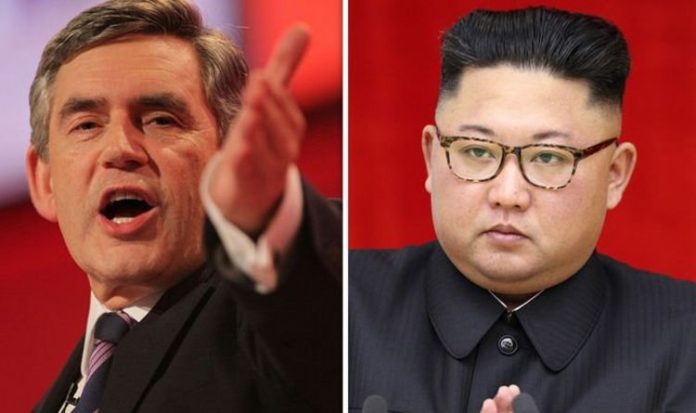 Gordon Brown: It’s irresponsible to talk about a referendum

Earlier this week, former Prime Minister Gordon Brown said the UK will become a “failed state” unless there are deep reforms in the way the country is governed. Mr Brown’s intervention came after a Sunday Times poll found people in all four nations of the UK believe Scotland will leave it in the next decade — with Brexit and the Government’s response to the pandemic seen as having accelerated the trend. Writing for The Telegraph, Mr Brown said Britain “must urgently rediscover what holds it together and sort out what is driving us apart”, and warned that the “world’s most successful experiment in multinational living is under greater threat than at any time in 300 years”.

He said: “I believe the choice is now between a reformed state and a failed state.”

Speaking on BBC Radio 4’s Today programme on Monday morning, he also accused Prime Minister Boris Johnson and his Government of being out of touch.

He added: “I do think Boris Johnson has not quite understood how deep the resentment is, how the lack of trust is causing him a problem, a problem about his acceptability in different parts of the country.”

It is not the first time Mr Brown, who was Chancellor of the Exchequer for 10 years from 1997 and became Prime Minister in 2007, has issued a doomsday warning.

In 2015, Mr Brown went as far as to say Britain would have turned into the “North Korea of Europe” if it left the European Union.

The former Prime Minister said abandoning the 28-nation bloc would have left the UK frozen out of political decision making, while forging alliances with new partners would have not compensated for the lost trade from the eurozone.

Writing in the Guardian, he said: “The Hong Kong option – ‘leaving Europe to join the world’ – is really the North Korea option, out in the cold with few friends, no influence, little new trade and even less new investment.

“We must tell the truth about the three million jobs, 25,000 companies, £200billion of annual exports and £450billion of inward investment linked to Europe; and how the ‘Britzerland’ or Norwegian alternatives (even Norwegians oppose the Norwegian option) leave us subject to EU rules, but denied a vote in shaping them.”

Mr Brown said the Tory Government, at the time led by David Cameron, had already left the UK isolated in Europe.

He added: “Being half-in half-out, a Britain that is semi-detached and disengaged – the Britain of the empty chair even when we are in the room – has made us weaker than ever: irrelevant on Greece, fringe player on climate change, mere spectator in the debate that could have shaped a European pro-growth policy, marginal on Ukraine, with ministers sounding ludicrous as simultaneously they say, ‘Russia must be confronted with a more united Europe’ and, ‘By the way, we are thinking of leaving’.”

He urged policymakers to use Britain’s position in Europe to rebuild and strengthen ties with the bloc.

He concluded: “In a decade or two, as the German population falls, Britain will again become Europe’s biggest, most powerful economy.

“It would be a terrible irony if Britain opts out, leaving Europe divided, Russia empowered, the US bypassing us for a Franco-German axis – and Scotland threatening to abandon a non-European UK.”

Mr Brown has in the past been accused of being the one who “surrendered Britain’s sovereignty to the EU”.

However, voters in France and the Netherlands strongly rejected the proposed Constitution in two respective referendums.

Despite the strong opposition in the member states, eurocrats ignored the results of such popular votes and the European Constitution was subsequently rebranded as the Lisbon Treaty, which passed in 2007 without a plebiscite.

Writing for the Heritage Foundation, an American conservative public policy think tank based in Washington DC, Nile Gardiner, former aide of Margaret Thatcher, and Sally McNamara, a senior policy analyst in European affairs, accused Mr Brown of being the “real enemy” of the British people for undemocratically signing such a treaty.

In a 2008 report, written a year before the Lisbon Treaty came into force, the authors said: “Prime Minister Gordon Brown’s decision to reject a referendum on the new European Union Reform Treaty (Treaty of Lisbon) should be viewed as one of the biggest acts of political betrayal in modern British history.

“Despite a rebellion by 29 of its own backbenchers, the Labour-led Government defeated a Conservative proposal to hold a popular vote on the Lisbon Treaty by 311 votes to 248 in the House of Commons on March 5.

“Brown’s refusal to support a referendum represented a stunning reversal of the Government’s 2005 manifesto pledge to hold a plebiscite on the European Constitution.”

Mr Gardiner and Ms McNamara added that the Lisbon Treaty paved the way for the creation of a “fledgling superstate”, which further eroded the legal sovereignty of European nation-states, entrenched a pan-European magistracy, a European Public Prosecutor, a federal EU police force (“Europol”), and an EU criminal code.

They concluded: “The notion that the people of Europe should not have a vote on a treaty with huge implications for the future of the continent demonstrates the utter contempt that the Brussels bureaucracy has for the average man or woman on the street.

“There is no doubt that if the treaty were put to a popular vote, the electorates of several countries would reject it.

“The whole ‘European Project’ is fundamentally undemocratic, unaccountable, and opaque.

“If subjected to referenda across the EU, it would almost certainly be consigned to the dustbin of history.”