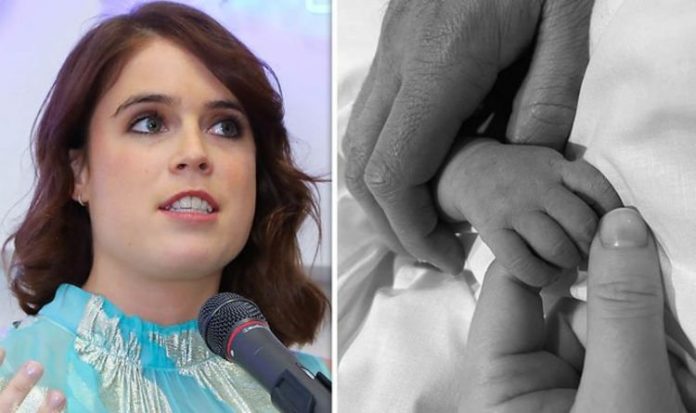 Princess Eugenie and Jack Brooksbank were married in October 2018 and today expanded their family after Eugenie gave birth to a bouncing baby boy. The couple shared the happy pregnancy announcement and today shared the first touching image of their son. But will baby Brooksbank be entitled to use a prince title?

Buckingham Palace shared a statement about the arrival of the new baby boy earlier today.

The statement reads: “Her Royal Highness Princess Eugenie was safely delivered of a son today, February 9, 2021, at 8.55am at The Portland Hospital. Jack Brooksbank was present.

Will Princess Eugenie’s son be a Prince?

Princess Eugenie and her sister Princess Beatrice both use the princess title, which is their right as children of the Queen’s son.

However, their cousins Zara Tindall, Peter Phillips, Lady Gabriella Windsor and James Viscount Severn do not use these titles.

Upon marriage, Eugenie’s husband was not granted a royal title and this means, Baby boy Brooksbank will not inherit a title unless granted one by the Queen.

However, due to the legal precedent outlined in the letters patent issued by King George V in 1917, only the grandchildren of sons of any Sovereign are entitled to use the prince or princess title.

The clause reads: “The grandchildren of the sons of any such Sovereign in the direct male line (save only the eldest living son of the eldest son of the Prince of Wales).”

But it is within the Queen’s power to provide other royals with a title if she wishes.

Sources close to the royals have long suggested Eugenie does not wish to request or accept a title for her child, even if she were offered one.

An insider told Vanity Fair: “Eugenie knows that a title can be a curse as well as a blessing and she and Jack want their child to live an ordinary life and eventually work to earn a living.”