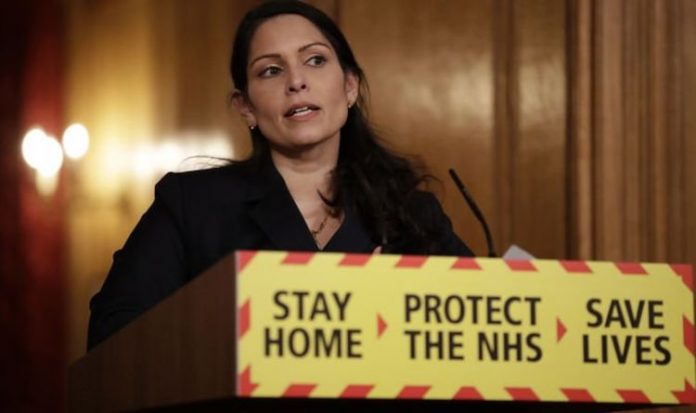 Police leader Ken Marsh said the Government was reneging on promises to protect frontline bobbies who risk their lives daily. They have been left exposed to the danger of catching and spreading the virus by the Government’s refusal to vaccinate them as a priority group, Mr Marsh said. The chair of the Metropolitan Police Federation, who represents 32,000 officers, added: “They have let us down horrifically. It is unforgiveable contempt.”

Home Secretary Ms Patel is due to launch a Police Covenant later this year but Mr Marsh described it as “not worth the paper it’s written on”. He spoke yesterday as a national survey showed criminals were “weaponising” the virus.

According to the Police Federation poll, one in three police officers in England and Wales have been threatened with infection by a suspect they believed had Covid-19. Federation leaders have repeatedly pressed the Government to give police, teachers and firefighters priority jabs.

Mr Marsh said: “My brave colleagues are very, very scared of catching it and taking it home. The Government has a duty of care to us and they are not adhering to that. We serve the Crown and therefore the Government should protect us.” But ministers insist vaccination by age – after the most vulnerable groups health-wise – is in line with scientific advice.

Mr Marsh said his branch of the Police Federation is looking at ways of mounting a legal challenge.

He says it is impossible to arrest suspects without officers breaching the two-metre social-distancing rule and putting themselves in danger of catching the virus. And the easing of lockdown rules and milder weather is likely to increase pressure on them to break up gatherings.

It was more than twice the number for the previous four weeks. The vaccine programme was devised by the Joint Committee on Vaccination and Immunisation (JCVI).

The Department of Health said: “We are focused on saving lives and continue to follow the advice of the independent JCVI to vaccinate the most vulnerable first, based on age as the biggest factor determining mortality.”

The Government has taken the ludicrous and very deliberate decision to deny brave police officers the protection of the Covid-19 vaccine. That’s the choice they have made. Let’s not hide behind scientists.

Where is the top cover that Boris Johnson and Priti Patel promised us when they were elected? It was all hot air.

They are not protecting the protectors. And my hard-working colleagues have had enough.

The Prime Minister and the Home Secretary have a duty of care to officers who are every day exposed to this deadly virus whilst catching criminals and keeping people safe.

They have let us down horrifically. It is unforgiveable contempt. NHS staff who are not public facing have had the Covid-19 vaccine.

We would not send a police officer to an angry, violent man wielding a weapon without a stab vest, a baton, a Taser, handcuffs and even perhaps a gun. So why are we not vaccinating officers – as a priority – against a deadly disease that is being used by criminals as a weapon?

We can’t police from two metres away. But we as a Federation have now been forced to seek legal advice on whether that’s exactly what police officers should be doing. For our health and safety.

Twenty nine police officers and staff in England and Wales have died from Covid-19. Thousands more have been forced to take time off sick.

We don’t want any more to become seriously sick or die because they didn’t have the protection that was readily available to them – because their Government refused to provide it.