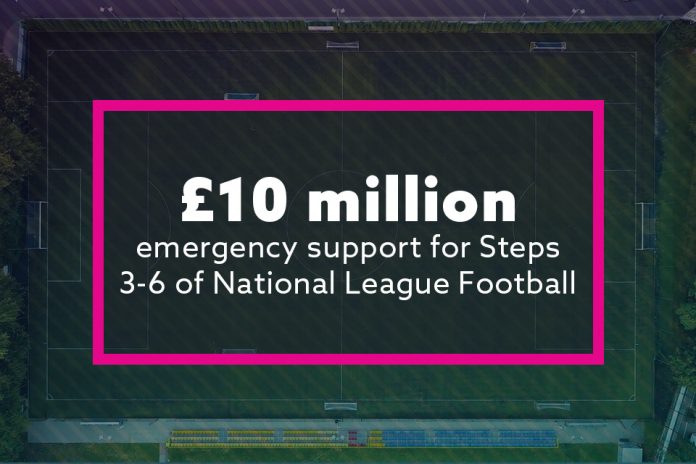 The funding will be provided in the form of grants. Clubs in Steps 3-6 will be contacted directly by the Football Foundation with full details and will be able to make an application from tomorrow. Funds will be distributed quickly to clubs through the Football Stadia Improvement Fund.

It is the first award to be announced from the Government’s £300 million Sports Winter Survival Package that is focused on helping those major spectator sports severely impacted by coronavirus restrictions survive the winter.

It follows submissions made from individual sports to an independent decision-making Board, supported by Sport England.

In October the Government announced it had brokered a unique deal with the National Lottery to provide a £10 million cash injection to keep Step 1 and 2 clubs afloat, and recently announced a provisional £11 million in very low interest long term loans to support clubs in those tiers. Clubs will be assessed on the basis of need, with grants available where loans are demonstrated to be unaffordable for individual clubs in line with the support offered for other sports.

The Sports Winter Survival Package is a sector-specific intervention that is on top of the multi-billion pounds worth of business support that has been made available by the Government, including the furlough scheme, business rates relief and business interruption loan scheme that has helped many sports clubs survive. Football alone has accessed many hundreds of millions of pounds of support through this.

“We promised to support sports and target help to where it’s most needed. Today we continue to deliver on that with further support for National League football clubs.

“The National League has already benefited from the Government support schemes through a £10 million Government-brokered cash partnership with the National Lottery, and there will be more support for the bigger clubs on the way.

“Today’s £10 million grant for lower league clubs in Steps 3-6 will act as a lifeline for around 850 clubs in towns and cities across England, and help these clubs through this difficult period until we can get fans back in safely.”

Chair of the independent Board, Sir Ian Cheshire said:

“On behalf of the independent Board we are pleased to be able to confirm funding from the Sports Winter Survival Package in the form of up to £10 million of grants for steps 3-6 of the National League System.

“As the sport and physical activity sector continues to navigate trying times, this package of government support is vitally important in ensuring that clubs, sports and leagues who are reliant on revenue from spectators can continue to stay afloat.

“With thanks to Sport England for their significant work managing the scheme, the independent Board continues to work at speed while prioritising those with most pressing need for support, and we anticipate confirming further recipients in the coming weeks.”

“With precious public money, we are providing financial support to the National League Steps 1 and 2 in the form of loans. However if clubs at those levels can demonstrate it needs grant funding urgently to survive, we will ensure that option is available. We will not let clubs go to the wall. Applications will be assessed by the independent Board, through the same rigorous process that we apply to other sports.”

Further confirmations of funding from the Sports Winter Survival Package will be made in due course.