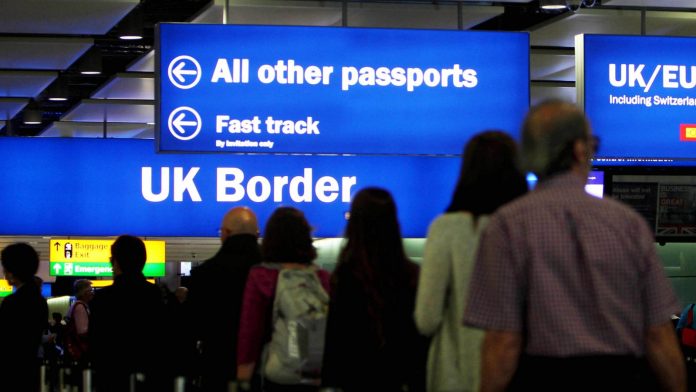 The Conservatives’ key promise to keep net migration under 100,000 has been branded a “political target” that is not immigration policy.

Professor Alan Manning, who chairs the Migration Advisory Committee, made the announcement at the launch of a landmark report commissioned by the government.

He also revealed the fall in the value of the pound since 2016’s EU referendum had more of an effect on prices than all EU migration since 2004.

The report made many recommendations, calling on ministers to lift the cap on high-skilled migration and limit the number of low-skilled workers allowed into Britain after Brexit.

It also suggested EU citizens be given no preference over those from countries outside the bloc.

If implemented, the reforms would be “the biggest change to the UK labour market in a generation”, the Resolution Foundation said.

Former home secretary Amber Rudd ordered the report last year to analyse the impact of Brexit on immigration after the implementation period, expected to begin on 1 January 2021.

It was released on Tuesday, making recommendations to the government and giving one of the most comprehensive pictures yet of migrants in the UK.

Prof Manning said he judged one of the Conservatives’ central immigration pledges to be a “political target”, not an immigration policy.

Former prime minister David Cameron made the promise in 2010 that net migration should be under 100,000 a year. It has been repeated by his predecessor Theresa May.

The latest ONS figures show this currently stands at 244,000.

There is no evidence that EEA migrants have reduced employment opportunities for UK-born workers, on average.

Migration raises unemployment among certain groups – the young and less well-educated, according to some evidence. This finding is subject to “significant uncertainty”.

There is no evidence that EEA migration has reduced wages for UK born workers, on average.

Migration has reduced earnings growth for the lower-paid and raised it for the higher-paid, according to some evidence. This finding is subject to “uncertainty”.

Immigration has, on average, a positive impact on productivity.

EEA migrants make a larger contribution – both in terms of money and work – to the NHS than they receive in health services.

There is no evidence that migration has reduced the quality of healthcare.

Migration from EEA countries – those in the EU and others including Norway and Iceland – has reduced the cost of “personal services”.

Migration has also raised house prices, more in areas where house-building is restricted.

A Home Office spokesperson said they would “carefully consider” the recommendations.

They said: “After we leave the EU, we will take back control of our borders and put in place an immigration system that works in the interests of the whole of the UK.

“We commissioned this report in addition to our engagement with business to better understand the impact of EU citizens on the UK labour market. The Government is clear that EU citizens play an important and positive role in our economy and society and we want that to continue after we leave.

“We will carefully consider the Migration Advisory Committee’s recommendations before setting out further detail on the UK’s future immigration system.”