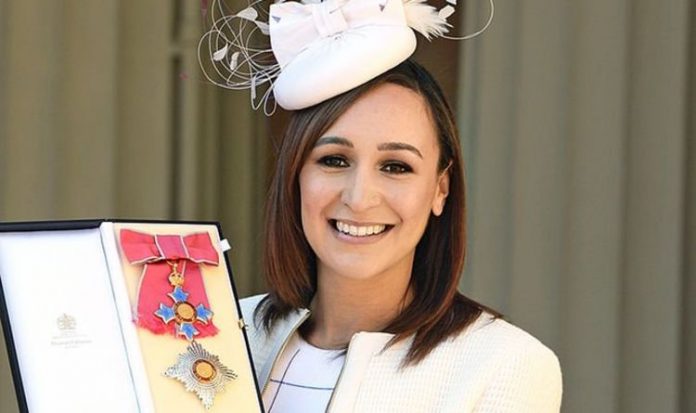 “They cancelled it. Not because of me though but I definitely would have done it,” smiles Jessica, mum to super-sporty Reggie, six, and three-year-old Olivia.

“And I have had a bit of a joke about it with some of the other parents. I’d be like, ‘Yeah, I’m going to rock up to Reggie’s sports day in full Team GB kit, with all my medals round my neck.’ Next year, maybe.”

But, she adds laughing: “I’m not one of those annoying parents but obviously I’m still competitive.”

But unlike the precision-honed, forensically designed training regimes that helped the Sheffield-born athlete become the greatest heptathlete of her ­generation, navigating parenthood has meant relinquishing control.

“I am the sort of person who likes things to be organised and structured,” admits Jessica, 34, who lives with her two children and her husband of seven years, Andy Hill.

“I do like control, but I’ve learned over the years to relax a bit and to adapt, especially with my daughter, who challenges me in every sense of my control and willpower.

“She is a very, very strong-minded little girl. She knows what she wants, how she wants it. She knows how to play a game very well and she’s just been such a fierce ­character from such a young age. My husband says it’s like me looking in a mirror, but I was an absolute angel when I was a child.

Jessica was awarded a Damehood in 2017 for services to athletics (Image: Getty)

“But I can recognise her tough and feisty side and although these qualities might feel tough for a parent at this stage, they are the sort of qualities that are going to stand her in good stead.”

Clearly, her daughter’s qualities are exactly the sort of traits that made Jessica almost invincible on the track and field between 2009 and 2012.

Jessica has been busy homeschooling her two children during lockdown, developing a fitness app, Jennis, and extolling the virtues of a good night’s sleep via her collaboration with Kent-based ­mattress maker Sleepeezee.

Plus she’s been keeping a close eye on the two stories dominating this year’s news agenda. “I watched a lot of news reports about Covid to start with,” says Jessica. “But it starts to affect you after a while so I kind of stopped watching.

“With Black Lives Matter it’s been so shocking to see the stories coming out of America and it makes you feel really sad and negative about the world, especially now I’ve got children.

“It’s horrendous that it still happens, and it shouldn’t happen in the world we live in but there’s positivity to be found in people ­getting behind the movement and trying to create change. It feels like no other movement I’ve experienced in my lifetime.”

Jessica, who has a white mother and a Jamaican father, Vinnie, is only too aware of racism, having occasionally experienced it herself growing up in Sheffield.

“I think generally through my childhood, I can maybe remember a couple of instances where I experienced racism. But I think I’ve been quite fortunate. But when I speak to my dad… obviously dad was born in Jamaica, he came over to England when he was 13, and, what he’s experienced in his lifetime, and when I talked to him about it, he’s still very much, ‘It’s the same.’ And it just, you know, kind of goes under another level where we don’t talk about it but it’s still very much happening.

“And the stories that my dad shares with me, it’s not what you want to hear for your family to go through and also, I never want my children to experience ­anything like that.

Jessica was awarded a Damehood in 2017 for services to athletics (Image: Getty)

“You know his grandad’s black but he never says, ‘Oh, Grandad looks at it a bit ­different.’ It’s just normal because it’s the way we bring our children up and I think that’s such an important part of it.”

Despite retiring from competition in 2016 and having two children, Jessica just about resisted the temptation to overindulge on Netflix and nachos during the lockdown and maintained a sensible fitness regime.

“I did a bit of both. I’ve done lots of running and I’ve spent a lot of time developing my fitness app, but I’ve still had plenty of time to watch Netflix in the evening.”

And has her legendary six-pack become a less chiselled one-pack? “It’s definitely not a one-pack. It is not as defined as it used to be but it is still there. It’s still hanging about and exercise is still important to me but just for different reasons. I no longer exercise for competitions or medals. I just exercise to feel good and to feel confident in the way I look and if I do that, I’m happy.

“I’m not going to have the ripped six-pack I had when I stood on the line in 2012 but I still want to be body confident and feel good in myself so that’s where I am now.”

Another 2012 legacy Jessica is positively revelling in is the Damehood she was awarded in 2017 for services to athletics.

“It’s pretty special. Being a dame is amazing. It’s such a lovely honour and I always forget that I am a Dame. I never thought I would become a Dame. I don’t really use it in my everyday life, and nobody really calls me Dame.”

Not even husband Andy? “No, he never calls me Dame. Maybe I need to sort that out. In fact, maybe I should start a WhatsApp group for Dames so we could all hang out. That would be fun.”

Jessica says she exercises to feel confident in the way she looks (Image: Getty)

Whether such a celebrity-filled group ever materialises Jessica’s immediate future depends on the progression of the pandemic, but one thing she definitely has no plans to do is Strictly Come Dancing like fellow 2012 gold medallist Nicola Adams.

“I’ve been asked to do Strictly loads of times but it’s not for me. I don’t mind ­dancing after a few glasses of wine but not on stage in front of all those people. It’s just such a big commitment and at this point in my life I just want to be there for my ­children.

“I’m much happier watching that sort of stuff from my sofa.

“I feel like I’ve done all the hard work already. I just want to put my feet up a bit and enjoy these years. I think I’ve earned it.”