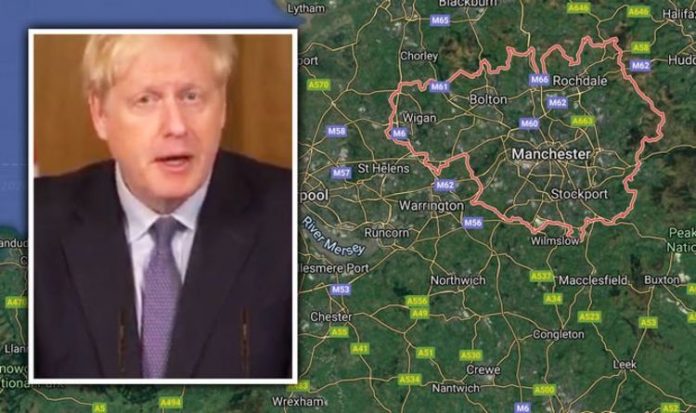 Greater Manchester’s 2.8million residents have been upgraded into a tier three lockdown this afternoon as the Prime Minister announced the new restrictions in response to rising cases in the area. Talks between local leaders in Greater Manchester, including mayor Andy Burnham, and the Government failed to reach an adequate conclusion regarding financial aid in the area this afternoon, according to Housing and Communities Secretary Robert Jenrick.

Mr Burnham accused the Government of walking out on talks for a financial bailout for the city.

The mayor slammed ministers for failing to provide £65million, the minimum sum needed to prevent a “winter of hardship”, which would plunge people unable to work into further poverty.

Mr Burnham said local leaders had already greatly reduced their original demand of £90million for stricken businesses and to top up furlough payments.

The Government offered a maximum of £60million, despite Greater Manchester’s compromise.

Mr Johnson agreed with Mr Burnham’s stance, and clarified the £22million would be in addition of any existing support promised to Manchester.

He said: “Andy Burnham is right in what he says about the length of endurance Greater Manchester has shown. The £22million, that is additional to other support.

“This is a Government that has put £190billion already into supporting businesses and jobs across the country, we are investing huge sums of money to support local authorities and another £1billion.

“Greater Manchester will have access to all kinds of funds.”