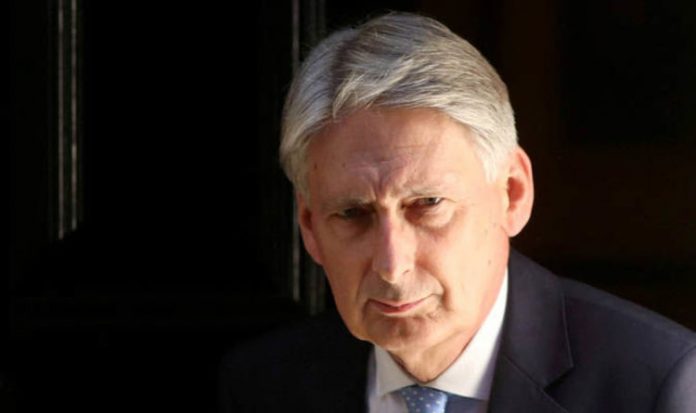 She dismissed figures, released by Mr Hammond last week, as “old news” when he stated that “no-deal” could wipe up to 10 per cent off the UK’s national income.

Mr Hammond incensed Brexiteer Tories last Thursday by re-releasing gloomy Treasury forecasts about the impact of not getting a deal.

It overshadowed that day’s publication by Brexit Secretary Dominic Raab of papers designed to reassure the country that preparations were well in hand if Britain left the EU in March without a deal.

Speaking to reporters on board the Government’s official Voyager plane as she flew to Africa, Mrs May said: “As I understand it the Chancellor was talking about a set of figures that came out in January.

“When they came out I commented that they were a work in progress at that time.”

She also made reference to comments made last week by the World Trade Organisation’s director general, Roberto Azevedo, who said a no-deal situation “would not be a walk in the park but it wouldn’t be the end of the world”.

Mr Hammond last night insisted that doubling the green levy on plastic bags to 10p was “under active consideration” despite reports of a rift between the Treasury and Downing Street over the plan.

There are suggestions the Treasury believes a rise in the charge would look like “profiteering”.