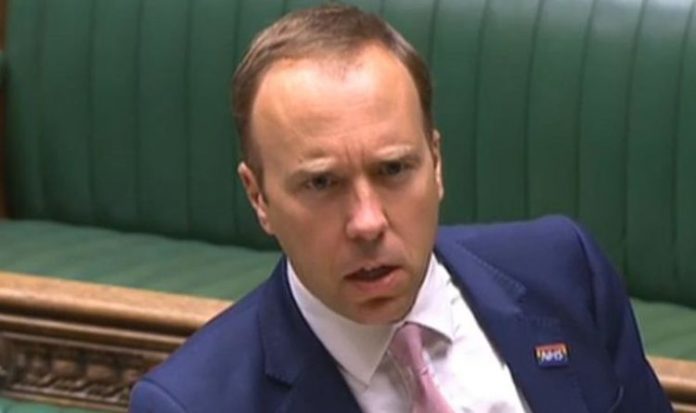 Matt Hancock hit out at the Labour MP who claimed civil servants are protecting their own interests by allowing the private sector to work on the NHS Test and Trace app. Mr Tarry asked the Health Secretary: “Scientists in SAGE have continuously warned that for the Test and Trace system to be successful, 80 percent of people in contact with those with COVID must be reached and we’re well off that target. I wonder whether the minister will consider seeking advice from our European partners who have actually had a functioning system since May or is he going to continue to allow private sector, which has no proven track record in this instance, and protect some of their interests of some particular companies that some civil servants allegedly have links with or are we actually going to see a serious approach on this?”

Speaking in the House of Commons, Mr Hancock replied: “Unlike the question, we will have a serious approach on this.

“I will absolutely defend to all ends the teams who work on our NHS Test and Trace system.

“The private sector companies without them, this would be impossible, the civil servants working day and night to make this happen and I will not have disparaging remarks about civil servants made in this house.

“I don’t think he was listening to the answer because the latest data show 84.3 percent of contacts were reached and asked to self-isolate where contact details were provided.”

Mr Hancock previously said that more than 300,000 people who may have unwittingly been transmitting COVID-19 had been reached by the test and trace system.

He told the Commons: “NHS test and trace is consistently reaching tens of thousands of people who need to isolate each week. In the latest week’s data, 84.3 percent of contacts were reached and asked to self-isolate where contact details were provided.

“Since its launch, we’ve reached over 300,000 people who may have been unwittingly carrying the virus and transmitting it to ensure that they keep themselves safe and keep their communities safe.”

It comes as Boris Johnson said people were returning in “huge numbers to the office” – but Downing Street said it could not yet provide information to back up the claim.

The Government is pushing for the civil service to lead from the front by returning to their desks, with a PR blitz due to commence this week encouraging all employees back to their workplace.

The next phase of the Government’s All In, All Together campaign will remind workers about the efforts taken to make workplaces “COVID-secure”, Downing Street said.

Mr Johnson, addressing his Cabinet members as MPs prepared to return to Parliament after the summer recess on Tuesday, said: “People are going back to the office in huge numbers across our country, and quite right too.”

The Prime Minister’s official spokesman told reporters that the public could expect to see civil servants curtailing their work-from-home habits.

But Number 10 said it was too early to be able to share data detailing how many people nationally had gone back to work, including how many in Whitehall were back to their work stations.

Mr Johnson’s spokesman said: “I don’t have the figures especially for today but you can expect to see more civil servants return to the office over the coming weeks with the return of Parliament and children to schools.

“We’ve been clear with departments that they need to ensure Government workspaces are COVID-secure and permanent secretaries have been undertaking the work to return civil servants to the office or workplace.”

Downing Street fears huge job losses in town and city centre shops and cafes if workers do not return to their pre-lockdown commuter patterns.