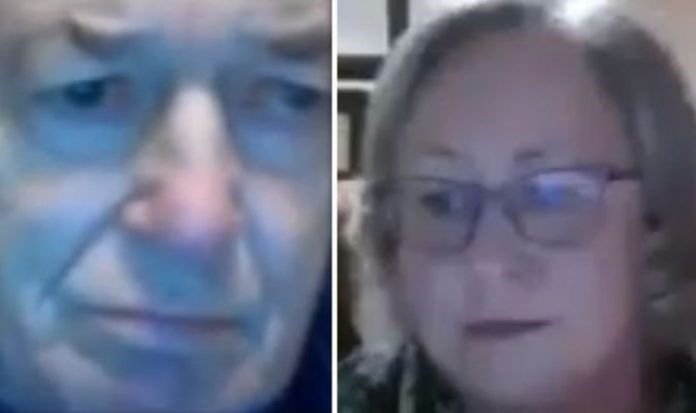 The Planning and Environment Committee in Handforth Parish Council in Cheshire was held over Zoom on December 10. Handforth is a town between Wilmslow, Heald Green and Styal with a population of just over 6,000. The meeting saw tempers flare over who chaired the meeting, with Jackie Weaver, the clerk, accused of kicking members out of the call. The clip, from December, surfaced on Twitter yesterday, with millions of viewers laughing and comparing it to a “sitcom”.

Ms Weaver’s presence upset Cllr Tolver, and after he was told it was possible to be removed from the call if he vocalised his frustrations.

He said: “It’s only the chairman who can remove people from the meeting.

Handforth’s chaotic council meeting proved a smash hit on Twitter, with Johnny Mercer, Tory MP for Plymouth Moor View, lauding the clip as the “quite simply the best TV I’ve seen in lockdown”.

One user said: “Forget Buckingham Palace, the Lake District, or Magna Carta. If you want to truly understand England you need to delve into the world of local Parish Councils.”

Another added: “NGL though it is people like Jackie Weaver who keep local democracy going. Cutting through nutty politicians and keeping business on track.

“We don’t say thank you or recognise them enough!”

One more said: “‘You have no authority here Jackie Weaver’ is a greater line than any Shakespeare.”

The council’s website posted minutes of the disastrous video meeting, one of only five held a year in Handforth.

It alleged Cllr Tolver “proceeded to disrupt the proceedings” and was “removed from the meeting and put into the virtual waiting room”.

It said Cllrs Brewerton and Burkhill “were also removed to the waiting room”.