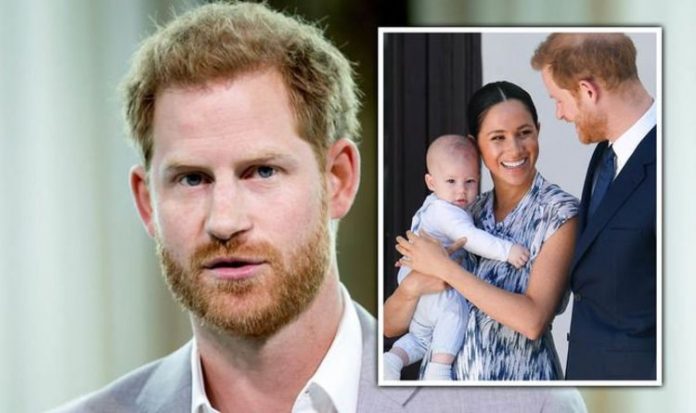 Prince Harry and Meghan Markle’s row with the Buckingham Palace over Archie Harrison’s birth certificate originates in the very arrival of the little Sussex in this world, one royal expert has said. The Duke and Duchess of Sussex welcomed their son Archie on May 6, 2019.

But, unlike other recent royal births, details of the arrival of the Duke and Duchess of Sussex’s baby was delayed and kept under wraps.

Royal commentator Rebecca English wrote in the Daily Mail: “Much of what we have seen unfold this week has its origins in Archie’s birth, which Harry became almost morbidly obsessed with keeping as secret as possible, even including where and when his son was born.

“Behind the scenes, matters were so fraught that more than one official — as I know from personal experience — was reduced to tears of frustration and despair.”

Archie was born at Portland Hospital at 5.26am following an overnight dash from Windsor to London.

Prince Harry news: A row erupted between the Sussexes and the palace over Archie’s birth certificate (Image: GETTY)

The operation to get Meghan to the hospital when she would get into labour had been kept so secret that even senior royals were not told about it, reported at the time.

A few hours after Archie’s smooth birth, Meghan and her newborn son returned to Frogmore Cottage with Prince Harry and the Duchess’ mum Doria Ragland, who supported her daughter throughout her labour.

Hours after the Sussexes had already got to know Archie, Buckingham Palace issued a first notice Meghan had gone into labour.

Prince Harry news: Meghan and Harry with Archie during their tour to South Africa (Image: GETTY)

Less than one hour later, at approximately 2.40pm, the palace issued its official announcement the Duchess of Sussex had given birth to Archie at the crack of dawn.

While Meghan and Harry had already said they would not introduce their son to the world from the footsteps of the hospital, a tradition started by Princess Diana, the Duke gave an impromptu and emotional press conference in Windsor.

He said: “It’s been the most amazing experience I could ever have possibly imagined.

“How any woman does what they do is beyond comprehension. But we’re both absolutely thrilled.

“We’re both absolutely thrilled and so grateful for all the love and support from everybody out there, it’s been amazing, so we just wanted to share this with everybody.”

Prince Harry and Meghan, who held a photo call on May 8, 2019 within Windsor Castle to present their son to the public, have also kept details of his christening secret.

Two months after his birth, Archie was christened at a private chapel in Windsor – but no photographers were allowed on the location’s premises and the names of his godparents were not disclosed.

Archie’s birth certificate was first issued on May 17 and presented the Duchess’ two names – Rachel Meghan – and her title, reading: “Rachel Meghan Her Royal Highness The Duchess of Sussex”.

However, 19 days later, on June 5, changes were submitted to both Meghan and Harry’s name fields.

While the Duke’s name field was added the title of prince, which had been originally left out, the names of the Duchess were removed from Meghan’s field, leaving only her full title.

After this change came to light on Sunday, Buckingham Palace suggested it was due to a “clerical error”.

Prince Harry news: Meghan and Harry introducing their son to the world on May 8 2019 (Image: GETTY)

However, Meghan issued a strongly-worded statement, in which she attacked suggestions made by royal commentators the changes could be seen as a snub to the Cambridges and stated the modification to the document had been “dictated” by the palace.

But, in a rare rebuttal, palace sources denied any order about the birth certificate came from Buckingham Palace, saying there is no royal protocol in place when it comes to civil documents such as birth certificates.

Moreover, they branded Meghan’s decision to use the word “dictated” in her strongly-worded statement “unfortunate”.

Another royal insider told the Daily Mail: “The certificate was changed by the former office of the Duke and Duchess of Sussex.

“It was changed to ensure consistency of the name and title of the Duchess with other private documents”.