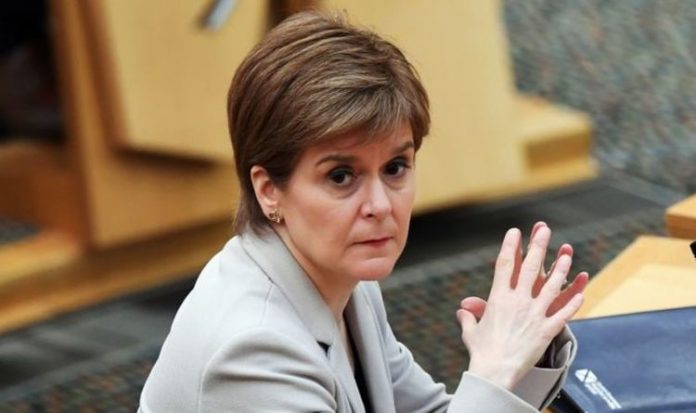 Nicola Sturgeon says she is ‘cautiously optimistic’ about progress

First Minister Sturgeon’s hopes of presenting the Scottish people with an independence pact were rubbished this week after a damning report warned an independent Scotland would face an economic blow three times bigger than Brexit. Ms Sturgeon, never having hinted at such an economic crisis, has suggested the country would prosper and be accepted by the EU with “open arms” post-Indyref2. Yet, the study, carried out by economists at the London School of Economics (LSE) found the fallout from independence could not be reversed by rejoining the EU.

Trade costs could soar an estimated 30 percent between Scotland and the UK, a devastating blow for Edinburgh which exported £51.2billion in goods and services to the rest of the UK in 2018.

And it could lead Britain to choose to buy elsewhere if prices hike in such an eventuality.

The calamity would quickly trickle down to the Scottish people, Robert Tombs, the renowned British historian told Express.co.uk, as taxes would sharply increase.

He reflected on the tension that followed the Brexit vote, and said: “All the turmoil we had in leaving the EU, Scotland would have in leaving the UK.

Scotland: Sturgeon and her SNP are pushing to hold a ‘legal referendum’ after May’s elections (Image: GETTY)

Ms Sturgeon has said if her Scottish National Party (SNP) win a landslide Holyrood election this May, then she will look to hold a “legal referendum”.

She has set out an 11-point roadmap for how she plans to get there.

Robert Tombs: The historian said Scots would be ‘poorer’ if the country gains independence (Image: Penguin)

Economists have warned that an independent Scotland would need to cut public spending in order to bring in its huge deficit given the large fiscal transfers from the rest of the UK.

Prof Tombs said none of this was “a very attractive package for the Scottish electorate, and I can’t imagine they would actually vote for it”.

Many have claimed that popularity for Scottish independence soars when the Conservative Party is in power in Westminster.

Paul Embery, a trade unionist and Labour member, told Express.co.uk: “The SNP are always stronger when there’s a Tory Government because there’s generally an anti-Tory feeling north of the border.

Elections: Sturgeon is hoping to repeat her SNP’s 2015 landslide in this May’s Holyrood’s elections (Image: GETTY)

“So it’s very easy for Sturgeon to blame those nasty Tories in Westminster for everything that goes wrong in Scotland.”

Prof Tombs similarly noted the SNP’s attraction appeared to be based on Boris Johnson being Prime Minister.

He said: “The rise in support for Scottish independence is very much linked with Sturgeon and a dislike of Johnson, and the supposition that Scotland has dealt well with the pandemic.

“It seems to me that’s all pretty fragile, because when people are asked to make up their minds on something that’s going to affect their whole futures, they’re not going just going to say, ‘I like Sturgeon but not Johnson.'”

Support for independence has grown during the pandemic, with pressure for a second referendum in seven years quickly mounting.

However, LSE’s study said the popularity makes no economic sense.

Thomas Sampson, associate professor of economics at LSE, told The Daily Telegraph: “What we’re finding is that because that trade with the rest of the UK is more important, that at least for the foreseeable future it wouldn’t really make sense for Scotland to rejoin the EU economically.”

In 2014, during the vote led by former First Minister Alex Salmond, the ‘Yes’ to leaving the Union camp said Scotland would be able to raise £250million-a-year more in tax without having to hike taxes.

Scottish independence: Scotland breaking away from the Union has grown in popularity in the pandemic (Image: GETTY)

It claimed the country could revamp and simplify the taxation process, making it harder for people to commit tax evasion and fraud.

Yet, the ‘No’ to leaving the Union side pointed to work carried out by the Institute of Fiscal Studies, which projected a rise in Scottish tax revenue, or a cut in spending, of around £6bn.

The outfit said Holyrood would have to reverse the rise in debt and push debt down to 40 percent of national income in forty years time, no short order.