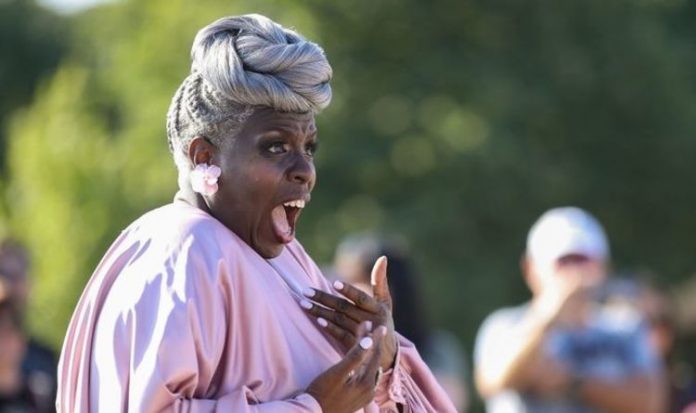 Karen Gibson, who was made an MBE in the Queen’s 2020 birthday honours list, said her talented Kingdom Choir team had not looked back since their spine-tingling appearance at the 2018 royal wedding. She said the performance turned the gospel singers into overnight celebrities and earned them a record deal, a tour, advertising gigs and prime time TV appearances – plus her own MBE in recognition of her services to music.

Ms Gibson recalled the moment in March 2018, when she received a call from a former choir member she had sung with 12 years ago.

She told Mirror Online: “She called up out of the blue one day and said I was going to get a call but she couldn’t tell me what it was about, but she said it was big.

“I didn’t get this call for a long time so I just wrote it off.

“But then I was coming home from work on the bus and I got a call from a very posh voice saying they wanted to invite us to sing at the wedding.”

She continued: “I thought it was a joke, so I asked if they were joking. There was this silence on the other end and I realised they were very serious.

“At that time we weren’t doing many big events and we were used to rehearsing in my font room every other Monday.”

Ms Gibson was sworn to secrecy and not even allowed to tell Kingdom Choir members they had been asked to perform at Harry and Meghan’s wedding.

She said she had to check everyone was free for May 19 but could not tell them why.

Harry and Meghan wanted the choir to sing Stand By Me so the members started putting their own version of the classic song together.

Ms Gibson said: “We cobbled something together that was absolutely awful, but as soon as they hear Paul’s voice something shifted in the room. They were like, ‘this is what we want’.

“By the time we got to the wedding they hadn’t heard the final version. They heard it for the first time that day.

“It was very nerve wracking for me. I was just like are we going to get this right?”

Ms Gibson said the Kingdom Choir was inundated with offers after the royal wedding and went on to sign a record deal, sing on Strictly Come Dancing and go on tour.

She said: “We didn’t expect the reaction at all. Our new website crashed twice. I hid in my house for about two days because I didn’t want to go down to the road and I didn’t want to be recognised.

“It was a lot to process. We did some crazy things. Things were happening back to back.

“We would often look at each other and think, ‘what are we doing here’. I couldn’t believe it.

“Now that period is over it’s almost like it was a dream. It’s all still a really surreal memory.”