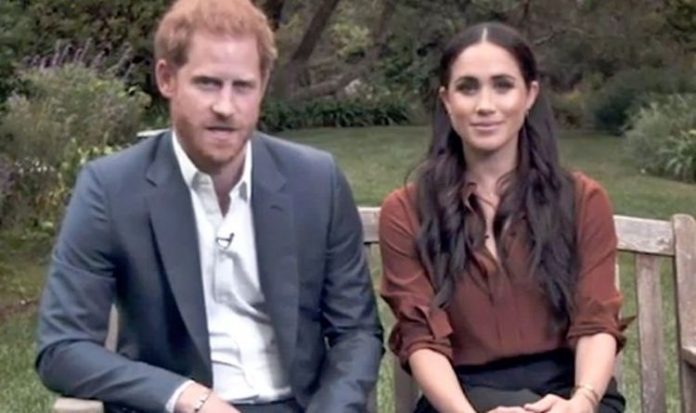 The awards are intended to reward people for their efforts in “charitable service, education, science, literature, racial justice, gender equality, environmental stewardship, youth empowerment, health and mental health”. While there have been comparisons made to the Queen’s honours, the couple have denied that their new non-profits work is attempting to rival it. Archewell press secretary Toya Holness said: “We look forward to sharing more about Archewell’s work in the weeks ahead, but any suggestion that it is intended to rival the UK honours list is false.”

However, it has now emerged that the Duke actually took a dig at the concept of giving out prizes in order to solve climate change, even though one of his new awards will reward “environmental stewardship”.

They later released the astonishing recordings of Harry talking about the environment and his royal life in March.

Among his comments was the damning statement that “giving out prizes doesn’t make any difference” when it comes to really making change.

Prince Harry and Meghan Markle’s Archewell will be launching a set of awards (Image: TIME)

Harry said: “I’m confident within the next five to ten years things will change but we can’t wait five or ten years.”

He added: “I think people need to be woken up and the only way to wake people up from what is effectively a consciousness crisis, I think, you need to be doing extreme things.

“And small steps or giving out prizes doesn’t make any difference these days.”

The recordings were allegedly taken on the same day that the Duke and Duchess of Cambridge first announced their plans for the Earthshot Prize.

For this reason, some people took this as a snub to Prince William’s £50million initiative.

Five winners will get £1million each year, and the scheme will run for 10 years.

The prize has the potential to inspire creative new solutions to the climate crisis and environmental preservation and could also be an opportunity for the Duke of Cambridge to create a lasting legacy.

William has also championed the environmental cause through his recent ITV documentary ‘Prince William: A Planet for Us All’.

However, Harry’s comment that awards do not make any difference could be interpreted as a slight.

In the prank phone call which duped Harry, he also took aim at political world leaders, claiming “the world is being led by some very sick people”.

He continued: “What you need to do is make real big changes that actually shock people, and it’s that shock factor that wakes people up.”

Harry was also clear in how he saw himself and Meghan as different from the rest of the Royal Family, despite the conversation taking place before their bombshell departure announcement.

He said: “We operate in a way of inclusivity and we are focusing on community. And so we are completely separate from the majority of my family.”

Meanwhile, Harry has shown his own dedication to environmental causes through his sustainable tourism initiative, Travalyst.

Now it has emerged that Harry and Meghan are preparing for their own awards scheme, one of which will be for environmental issues.

The outlet also claimed that the couple have run into issues while trademarking Archewell, though their final application was recently resubmitted.

However, the Sussexes’ spokeswoman said: “The trademark application has followed the normal course of business for the US Trademark process and any suggestion otherwise is also false.”

So far, Harry and Meghan’s Archewelll launch has consisted of a website with an email subscription box and definitions of the root words ‘arche’ and ‘well’.

The full launch has been postponed, in part due to the coronavirus pandemic.