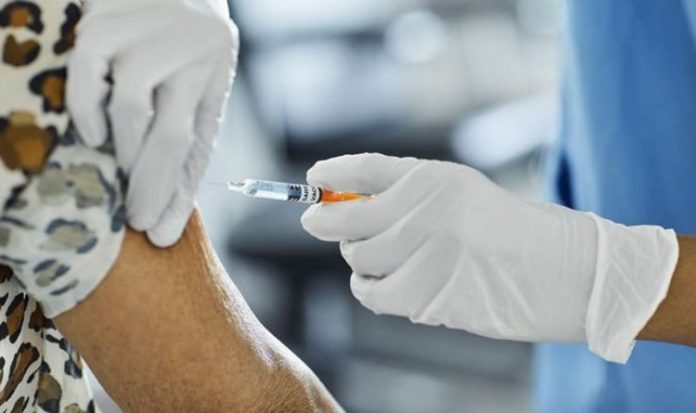 Vaccines ‘should be offered to those aged 40-49’ says expert

Sarah Lee, assistant to the coroner, said: “While driving home, travelling north on the A1124 in Greenstead in the direction of Halstead, Essex, her vehicle turned into the side of a vehicle going in the opposite direction. “The reason for this loss of control is as yet unknown.” Mrs Gray suffered serious injuries and was transferred to Addenbrookes Hospital, in Cambridgeshire, where she died on January 16.

The court heard Essex Police is not looking to prosecute anyone in connection with the accident.

The cause of death, after a post mortem examination, was given as multiple injuries caused by a road traffic accident.

Her inquest was opened and adjourned to a later date at a hearing on Wednesday.

The court heard at a separate earlier unconnected hearing how Peter Smith, 82, from a care home in Colchester was vaccinated against coronavirus just two days after recovering from the virus.

He died within a few hours of receiving the jab, an inquest heard.

Mr Smith tested positive for Covid-19 on December 28 after having symptoms for 10 days, the court heard.

He was admitted to Colchester Hospital on January 2 where he developed pneumonia and an acute kidney injury.

Two pensioners died after the vaccine but the cause of death is unknown (Image: vax)

However, he recovered after treatment and on January 5 was discharged back into his care home in Colchester, Essex, where he fought off coronavirus, the court heard.

Assistant coroner Tina Harrington said on January 22 Mr Smith had a telephone consultation with his GP when it was agreed he had beaten the virus and was feeling well.

Two days later, on the morning of January 24, he received his first dose of coronavirus vaccine and the court heard that within a few hours he was tragically dead.

Ms Harrington said: “On the morning of the 24th of January he received his first Covid vaccination. At around 1.25pm he was eating his lunch when he began choking.

“The carers smacked his back and he went limp and was placed on the floor where CPR was commenced.

“Paramedics used forceps to remove the food that was lodged in his throat, however, the gentleman, Mr Smith, sadly passed away. Police did not attend but said there were no suspicious circumstances.”

Mr Smith was vaccinated days after he had recovered from the virus (Image: Getty)

Despite the short length of time between the jab and his death, Ms Harrington made no further mention of the vaccination in her consideration of what caused his death.

The court heard that Mr Smith’s daughter and two sons had been in touch with the coroner about the death by email.

She said: “The said ‘as a family we are comfortable with the cause of death and there are no issues surrounding his death, care or treatment and we do not wish to attend the inquest.'”

A non-invasive post mortem was carried out which gave the main cause of death as choking on food matter.

Despite recovering from coronavirus, Covid-19 was added as a part two cause of death alongside hypertension Parkinson’s disease and vascular disease.

This means Mr Smith is likely to have been included in the published figures for coronavirus deaths in care homes, despite not being killed by the illness.

Mr Smith’s death was registered as Covid related – although it wasn’t (Image: Getty)

Ms Harrington recorded an accidental verdict caused by the choking.

Millions of people have been given their first coronavirus vaccination in the UK, with few reports of complications or deaths soon afterwards.

The Medicines and Healthcare Products Regulation Authority (MHRA) is monitoring any adverse health effects or deaths soon after vaccination, but so far believes no deaths have been linked to the vaccine.

According to its latest published update there have been 406 reports of deaths of elderly people following vaccination, but none are believed to have been caused by it.

The report said: “Part of our continuous analysis includes an evaluation of natural death rates over time, to determine if any specific trends or patterns are occurring that might indicate a vaccine safety concern.

Millions have been vaccinated without any side effects (Image: Getty)

“Based on age-stratified all-cause mortality in England and Wales taken from the Office for National Statistics death registrations, several thousand deaths are expected to have occurred, naturally, within 7 days of the many millions of doses of vaccines administered so far, mostly in the elderly.

“The MHRA has received 197 UK reports of suspected ADRs to the Pfizer/BioNTech vaccine in which the patient died shortly after vaccination, 205 reports for the Oxford University/AstraZeneca vaccine and four where the brand of vaccine was unspecified.

“The majority of these reports were in elderly people or people with underlying illness.

“Usage of the AstraZeneca has increased rapidly and as such, so has reporting of fatal events with a temporal association with vaccination however, this does not indicate a link between vaccination and the fatalities reported.

“Review of individual reports and patterns of reporting does not suggest the vaccine played a role in the death.”