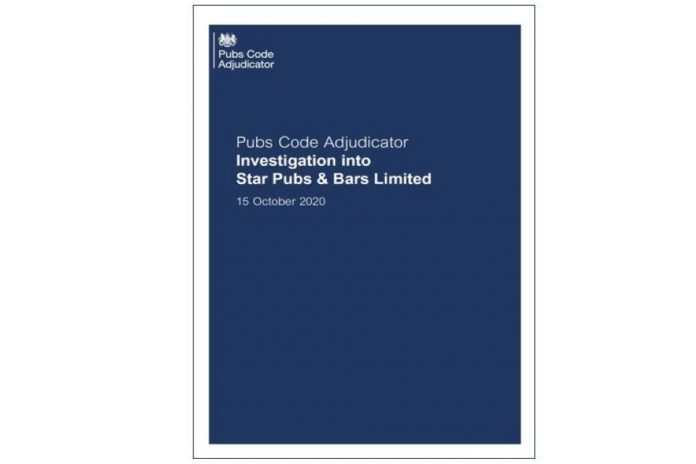 After completing her first investigation under the Pubs Code Ms Dickie said the nature and seriousness of the breaches by Star (part of the Heineken Group) that she had uncovered merited a financial penalty. The fine would act as a deterrent to Star and other pub-owning businesses she regulates from future non-compliance.

The report of my investigation is a game changer. It demonstrates that the regulator can and will act robustly to protect the rights that Parliament has given to tied tenants.

I will be holding discussions with all the companies I regulate following my findings about how they will ensure they are Code compliant. My message is that if anyone previously had any doubts about my resolution to act when I find breaches, they can have no doubt now.

Star – which operates the pub estate business of Heineken in the UK – had persisted in forcing its tenants to sell unreasonable levels of Heineken beers and ciders when they requested to go free of tie. This was despite repeated regulatory interventions and clear arbitration rulings from the PCA.

The PCA found the company had committed a total of 12 breaches with the result that it had frustrated the principles of the Pubs Code. As well as identifying how the company had offered stocking terms that had acted as a deterrent to tenants pursuing a free-of-tie tenancy, the PCA highlighted systemic corporate failures by Star in its approach to compliance.

Specifically, during the investigation she found that the company had included a responsibility in the job description of the company’s Code Compliance Officer ‘to ensure the Code is interpreted to the commercial benefit of Heineken UK’. This breached the Code requirement to appoint a compliance officer whose role is to verify compliance.

In the report of the investigation the PCA described Star as a repeat offender and said the company had been given opportunities to set itself on a compliant path “but intentionally or negligently failed to do so”.

It failed to heed statutory advice, the PCA’s regulatory engagement and learnings from arbitration awards. It did not engage frankly and transparently with its tenants or meet the standards required of a regulated business when engaging with the PCA.

Where it did change its approach, the efforts it made to comply were for the most part inadequate and not credible.

Ms Dickie’s investigation covered the period from 21 July 2016, when the Pubs Code came into effect, until 10 July 2019. She found multiple breaches by the company relating to stocking obligations. In particular, up to August 2018 96 tenants who requested a free-of-tie option were told that 100% of the keg beer they sold had to be Heineken brands.

This was contrary to the legal requirement that stocking terms should not prohibit a publican selling competitor brands. After several arbitration rulings by the PCA, the company switched to a tiered approach as to the amount of own brands to be stocked and specifying ‘must stock’ brands.

However, this “crude” policy was still not reasonable and compliant in many cases. Tenants who sold little or no Heineken products at the time that they asked to go free of tie faced having to stock 60% Heineken keg products within one year. This approach could have a particularly significant impact on some former Punch tenants whose pubs were purchased by Star in 2017. Star had no documentary evidence to show how the percentages in the tiered approach were decided.

All of this served as a barrier to tenants pursuing a free-of-tie option. Tenants told the PCA that Star’s proposed terms were inappropriate for the nature, size, location and trade of their pubs. They feared that they would lose their ability to react to local conditions and changing tastes during their tenancies; there was little demand for some products, including ‘must stocks’ and it would be a significant commercial risk for them to swap out currently popular products to make way for Heineken brands.

This has been a thorough and detailed investigation and I have concluded that Star used unreasonable and non-compliant stocking obligations in its proposed free-of-tie tenancies over a significant period. Indeed, some of those obligations were not stocking requirements allowed under the Pubs Code.

Despite meetings with me and findings I made in arbitrations, Star did not act in a timely, consistent or transparent way to correct what it was aware – or ought to have been aware – were instances of non-compliance. Supporting what Star’s evidence identified, tenants told me that they felt pressured by the company into settling on unfavourable terms or that they simply abandoned their free-of-tie right altogether.

The evidence I reviewed led me to conclude that Star’s policies and patterns of conduct served as structural barriers to tenants going free of tie. Protracted negotiations over unreasonable stocking terms would present a deterrent to tied tenants from effectively exercising their right under the Pubs Code to go free of tie. The freedom to access these rights and for tenants to do the best for their business is now more important than ever given the uncertainty the pandemic has brought to the industry.

I am also aware that some of Star’s free of tie tenants are already subject to terms that I do not consider compliant with the Code. This has resulted in unreasonable terms ending up in the market.

The company must change its mindset and become proactive in its approach to compliance. I have decided this can best be achieved by the imposition of a sanction that will serve as a deterrent to future non-compliant conduct by Star and other pub-owning businesses.

As well imposing the fine, which by law is based on the turnover of the whole of Heineken UK, the PCA has also ordered Star to make all its free-of-tie tenancies Pubs Code compliant and to ensure future Code compliance. Every free-of-tie tenancy agreed by Star must be audited and those tenants with non-compliant stocking requirements are to be assured that they will be made compliant or will not be enforced. All changes must be paid for by Star.

Ms Dickie has given the company six weeks to provide a detailed response to how it will implement her recommendations and she has ordered it to write to all its tenants explaining her findings, the measures Star is taking to respond to them and how these will affect tenants in practical terms.

The full investigation report can be accessed here.