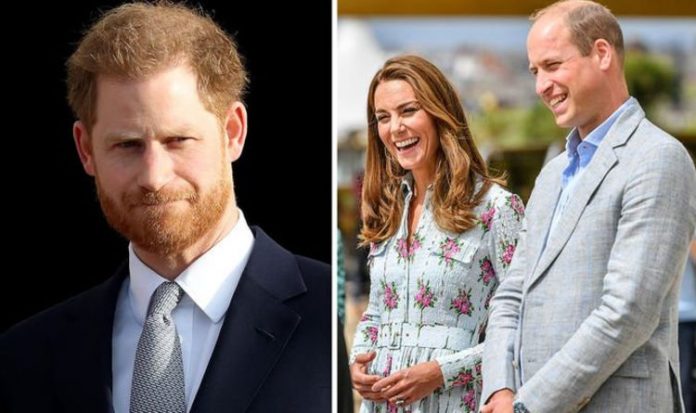 Prince Harry, 36, and Prince William’s complex relationship is the subject of a new royal biography. Royal historian and author Robert Lacey’s new book Battle of Brothers: William, Harry and the Inside Story of a Family in Tumult, examines the trajectory of Harry and William’s brotherly bond from best friends to rivals.

Prince William was destined to be king from birth and raised to be aware of his future on the throne while as a second son Harry was given the status of ‘spare.’

For years, Harry was William’s “number-one companion” but this dynamic dramatically shifted when William’s wife Kate came on the scene, Mr Lacey claims.

Describing the somewhat directionless position Prince Harry found himself at the start of his 30s, Mr Lacey writes: “As Prince Harry entered his thirties, Diana and Charles’s second son could pride himself on much.

“His Sentebale charity in Lesotho was going from strength to strength, and in September 2014 his Invictus Games – the Olympics for injured veterans that he had both inspired and helped to organise in London had proved a stunning success.”

“When it came to his love life – those ever-available women- Harry was clearly seeking something deeper and more satisfying than availability.

Prince Harry and Meghan Markle have settled in the USA since stepping away from royal life in March.

Since the arrival of his son Archie Harrison in May 2019, Harry and William are understood not to have seen much of one another.

As Prince Harry seeks to carve a life for himself outside the Royal Family, Prince William and Kate are gradually moving closer to their future roles as King and Queen Consort.

In recent weeks Harry and Meghan have spoken out on the upcoming US elections, something they would not have been permitted to do as working royals.

Prince William and Kate are bound to royal duty while Meghan and Harry are now more free to express their thoughts on polemical topics.

Meghan and Harry are expected to remain in the USA until the coronavirus pandemic recedes enough to permit transatlantic travel.