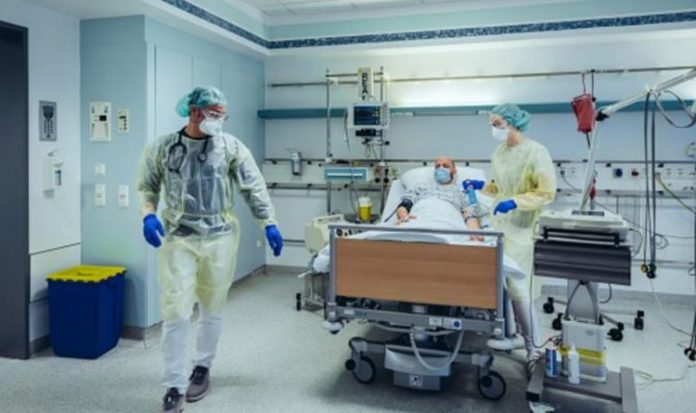 They accounted for more than half of the four million people on the NHS waiting list and included over 80,000 waiting over a year. Doctors said the sobering figures for England laid bare “the devastating extent of patient suffering” due to the pandemic. The number of people waiting longer than 18 weeks stood at 620,454 in July 2019.

But after non-urgent procedures were cancelled while hospitals battled Covid-19, it soared to 2.15 million this year – the worst performance since records began in August 2007.

Professor Neil Mortensen, president of the Royal College of Surgeons of England, said: “Patients who have now been waiting many months, even a year or more for treatment, cannot afford to wait until next spring.

“We urgently need to build up our hospital reserves if we are to see this winter through.

“Flu, together with continuing local Covid outbreaks, must not bring surgery to a standstill again, or thousands more will suffer.”

More than 140,000 elective operations – including hip and knee replacements and cataract surgery – were carried out in July, up from 41,000 in April. However, it was still less than half the figure of 314,000 in July last year.

Dr Chaand Nagpaul, council chair at the British Medical Association, said: “Today’s figures reveal the devastating extent of patient suffering across the country as people wait longer than ever before for treatment during Covid-19.

“The average wait for treatment by a hospital consultant went up to 19.6 weeks in July, meaning patients are waiting almost five months to get the care they need.

“At worst, a second spike will overwhelm our already battered NHS and add insult to injury by generating a further, potentially uncontrollable, backlog.”

Meanwhile, activity in A&E departments continued to recover but remained below usual levels.

A total of 1.7 million attendances were recorded in August, down 19 percent year-on-year but an increase from June and July when numbers were down 33 and 30 percent, respectively.

Dr Katherine Henderson, president of the Royal College of Emergency Medicine, said it was worrying to see the number of patients waiting more than 12 hours in A&E creeping up towards normal levels.

She said: “We must eliminate crowding now, otherwise we risk turbocharging the spread of coronavirus in the very places designed to treat it.”

The number of urgent cancer referrals made by GPs in July was down 19 percent on the same period last year. But this was an improvement from year-on-year falls of 47 percent in May and 21 percent in June.

The number of patients referred for radiotherapy cancer treatment in July was 8,257, up from a low of 6,532 in April, and above the 7,725 figure in February.

Health chiefs said it was important to acknowledge that progress had been made since the height of the pandemic.

Niall Dickson, chief executive of the NHS Con-federation, said staff had worked hard to restore services but faced a “huge mountain of work”. He said: “There is not a single leader in the NHS who will want their patients to wait longer than they have to for their operation, test or scan.

“Our members remain committed to delivering as much care as is safely possible.

“But given the necessary social distancing and infection control measures that have to be in place, as well as both supporting frontline staff who are close to burnout and maintaining capacity to deliver a Covid-19 and a non-Covid-19 service, restoring services to ‘normal’ will take time.”

“Pleasingly, cancer radiotherapy treatments are now fully back to their pre-Covid levels and we’re seeing a substantial rebound in routine appointments and operations, which have more than doubled since the peak of Covid.

“The success of these service expansions depends on keeping Covid under control.”