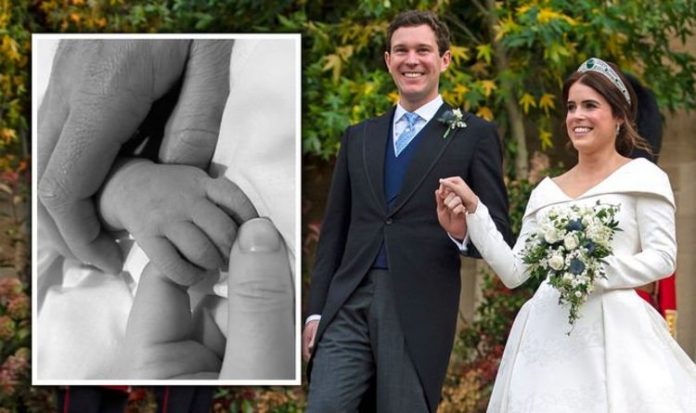 Princess Eugenie and Jack Brooksbank have finally welcomed their first child, it was announced on February 9 to the delight of royal fans. The couple were “safely delivered” of a baby boy at 8.55am, weighing 8lb 1oz, Buckingham Palace said in a statement. Thousands have taken to Instagram to congratulate the new parents after they shared an adorable snap of their hands cradling their baby son’s tiny fingers.

The Palace said: “Her Royal Highness Princess Eugenie was safely delivered of a son today, February 9, 2021, at 8.55am at The Portland Hospital. Jack Brooksbank was present. The baby weighs 8lbs 1oz.

“This is Princess Eugenie and Jack Brooksbank’s first child, The Duke of York and Sarah, Duchess of York’s first grandchild, and the ninth great-grandchild for The Queen and The Duke of Edinburgh.”

The statement added: “Her Royal Highness and her child are both doing well.”

Although he is currently 11th in line to the throne, baby Brooksbank’s place in the line of succession will likely drop lower over the years.

Any future children born to Prince George, Princess Charlotte, Prince Louis or Archie Harrison will take precedence in the line of succession.

Although baby Brooksbank is the son of a Princess, he has not been given a royal title.

Princess Eugenie and Jack Brooksbank were not given new royal titles by the Queen when they married in 2018, and so the baby’s title is likely to remain as Master Brooksbank.

The baby is also unlikely to have HRH status, although his mother has this style.

Both Princess Eugenie and Princess Beatrice are non-working members of the Royal Family.

They have both pursued their own careers since attending university, and this will also likely be the case for Eugenie’s son.

Princess Eugenie’s son was not the only royal baby expected to arrive this year.

The couple are already parents to their two daughters, Mia and Lena.

Like Eugenie’s child, Zara and Mike’s children do not hold any royal titles.