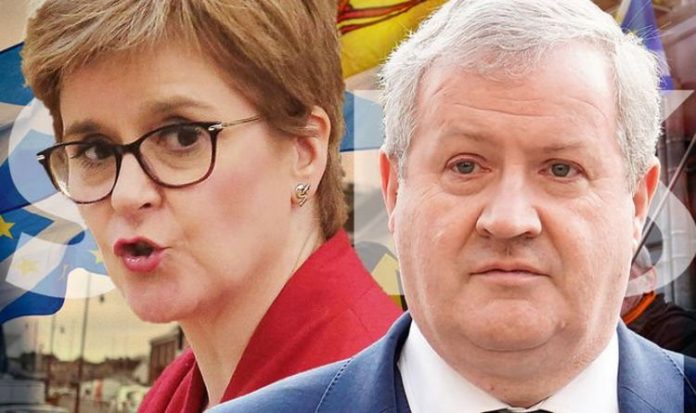 The SNP’s Westminster’s leader was put in his place when he insisted there is “nothing in the Edinburgh declaration” that said the 2014 vote to break away from the UK was “once in a generation”. But Scottish Tory MP Jackson Carlaw pointed out Ms Sturgeon had signed the Edinburgh Agreement, which said the referendum, six years ago, will “deliver a fair test and a decisive expression of the views of the people of Scotland and a result that everyone will respect”.

He tweeted: “There is nothing in the Edinburgh declaration that says it is once in a generation.

“@Douglas4Moray so stop lying about it. You have become like @BorisJohnson, telling the truth has become separated from reality.

“You are losing the argument, this is desperate stuff.”

But Mr Carlaw pointed out the contrary saying it is “there in black and white”, while screen grabbing a picture of the Edinburgh Agreement from 2014.

He posted: “Point four of the Edinburgh Agreement, signed by Nicola Sturgeon, says the 2014 vote will ‘deliver a fair test and a decisive expression of the views of the people of Scotland and a result that everyone will respect’”.

The document was signed and agreed by Ms Sturgeon ahead of the 2014 referendum, where Scots voted 55 percent to 45 percent to stay in the UK.

Ms Sturgeon on Tuesday pledged to publish draft legislation for a new Scottish independence referendum, including the question and timing of the vote, before the country’s parliamentary election next year.

Ms Sturgeon put on hold plans for a second referendum in March to concentrate on the coronavirus crisis.

However, the most sustained support for Scottish independence in the modern era has prompted nationalists to renew their push for another vote.

She said: “Before the end of this parliament, we will publish a draft bill setting out the proposed terms and timing of an independence referendum as well as the proposed question that people will be asked in that referendum.”

Anger over concerns Prime Minister Boris Johnson has responded slowly to the COVID-19 pandemic and Scots’ anger over the UK’s decision to leave the EU has led for the first time to sustained support of over 50 percent for independence.