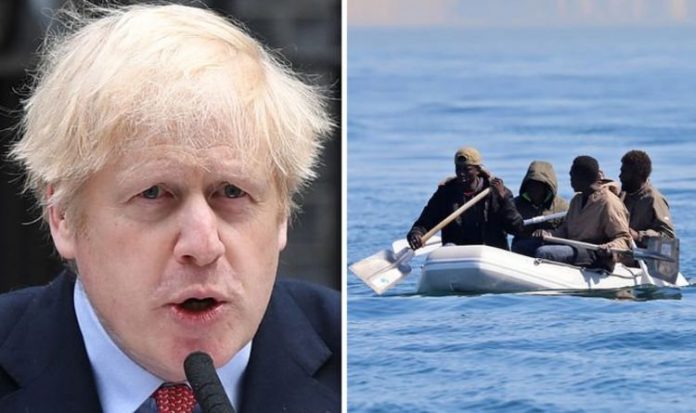 Recent weeks have seen an increased number of migrants, many of whom claim to be refugees, arriving in the UK by small boat. Currently the British Border Force intercept the dinghies and take migrants onboard in a bid to ensure their safety.

However this has led critics to claim they are effectively providing a “taxi service” across the English Channel.

On Friday an estimated 150 migrants attempting to cross to Britain were picked up by the Border Force.

This followed a record 235 who made the trip on Thursday.

So far this year more than 3,800 migrants have made the crossing, versus 1,850 for the entirety of last year.

As the English Channel is the world’s busiest shipping lane, and many of the boats are flimsy inflatables, there are fears a fatal accident could take place.

According to a Whitehall source, speaking to The Times, Ministers are considering a strategy previously used by Australia called “push back” that would block migrant boats from entering UK waters.

The source said: “Australia does an operation they call ‘push back’ and it has been successful.

“It is one option we are looking at.”

There are concerns migrants will threaten to jump overboard if the British Border Force blocks their boats, requiring authorities to withdraw.

The Government is also said to be considering bringing in Royal Navy vessels to support the Border Force.

However Tony Smith, formerly head of Border Force, was sharply critical of the plans.

Speaking to The Times he said: “Bringing in the navy and other assets will provide us with more coverage at sea, but the problem remains the same: how to turn back the boats?

“I don’t think forcible interdiction or blockade will work.

“Our primary responsibility is to save lives and rescue people. Likewise the French.

“The problem is that they are resisting rescue by the French.”

In 2013 Australia introduced a new “push back” policy after the number of migrant arrivals by boat reached 20,000 a year.

Under this scheme the Royal Australian Navy intercepted the boats and took them back to the country they departed from, usually Indonesia.

However it was sharply criticised by the United Nations which said potential asylum seekers in boats should not be blocked.