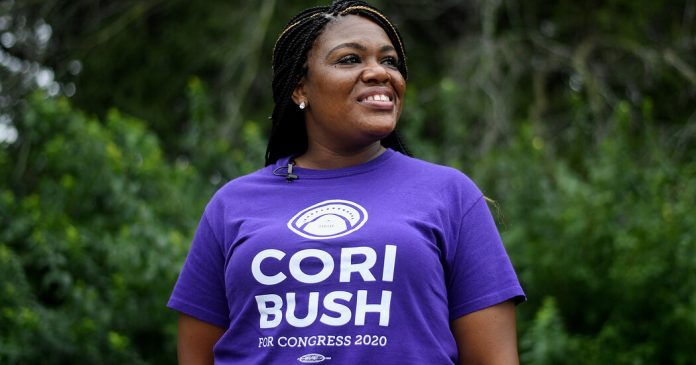 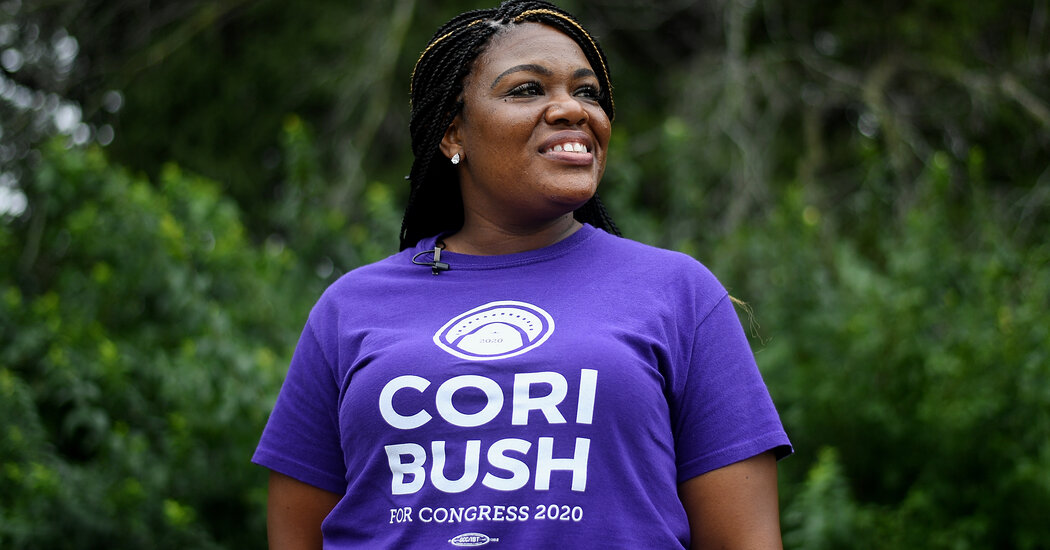 FERGUSON, Mo. — As an activist who jumped into the political arena after the police shooting of Michael Brown here six years ago, Cori Bush is accustomed to hard fights. She has been maced, shot at with rubber bullets and cloaked in tear gas at so many protests against police brutality that they have blurred together.

So when she heard that Representative William Lacy Clay, the 10-term Democrat she is challenging in Missouri’s Democratic primary on Tuesday, had called her “a prop” for the Justice Democrats, a national progressive group that exists to knock off titans of the party establishment such as himself, Ms. Bush did not miss a beat.

“I had no title, no name, came out of the Ferguson uprising and people know who I am across the world,” Ms. Bush said on Saturday, responding to comments Mr. Clay made about her in an interview with The New York Times. “Not because I took money from some group — none of that. It is because I stayed true to a message of change for real people.”

All over the country this summer, progressive candidates like Ms. Bush, 44, are doing battle with veteran incumbents over the identity of the Democratic Party. In New York City, Jamaal Bowman defeated Representative Eliot L. Engel, a 16-term incumbent and powerful committee chairman. In western Massachusetts, Alex Morse, the mayor of Holyoke, is trying to unseat another long-serving chairman, Representative Richard E. Neal.

Emboldened by a lethal pandemic that has shone a spotlight on systemic racial and economic inequality, and the swell of public support for the Black Lives Matter movement, they are seeking to sustain the momentum gathered in 2018 by insurgents, like Representative Alexandria Ocasio-Cortez of New York, who felled establishment figures. In St. Louis, Ms. Bush’s candidacy is a test of whether the protest movement can translate into hard electoral power on the federal level.

For Democratic leaders watching warily from Washington, Mr. Clay’s fate will also indicate whether the rise in progressive energy that has cost powerful white incumbents in places like the Bronx, Queens and Boston their seats can also dislodge a Black representative deep in the heartland of the country.

In few places have the intraparty battle lines glowed as brightly as greater St. Louis, a once-mighty industrial city plagued by economic malaise, a legacy of racial segregation and now spiking coronavirus cases, where the death of Mr. Brown in 2014 helped give rise to the movement on the left demanding a replacement for an incremental approach to governing.

The contest has grown exceedingly bitter, and Mr. Clay, 64, has come to view it not only as a fight for his own survival, but a chance to snuff out an upstart movement he sees as dangerously divisive. In an interview last week, the congressman suggested that the effort to unseat him by Ms. Bush, who is also Black, rests on a racist premise.

“The easy, racist way to lay it out is, ‘Look at Clay — what has he done for his district?’” he said, adding, “I fight for that district every single day.”

Mr. Clay accused the groups like Justice Democrats and Brand New Congress that have helped groom progressive primary challengers of targeting members of the Congressional Black Caucus specifically because “they think we are easy targets.”

“She’s a prop,” Mr. Clay said of Ms. Bush. “They use her to raise money to support their infrastructure.”

Mr. Clay has a powerful infrastructure of his own.

A Clay has represented part of St. Louis in Congress since 1969. William Lacy Clay Sr. was an icon of the civil rights movement in the city and a founding member of the Congressional Black Caucus. When he retired nearly two decades ago, his son, William Lacy Clay Jr., inherited the seat and the loyalty of Black St. Louisans who have sent him back to Washington every two years since.

By some estimates, a majority of voters in the city have never voted for a congressman by any other name. Because Democrats so dominate this district, the real contest is fought each term in the Democratic primary, not the general election.

Mr. Clay is not bashful about his seniority in the Black Caucus and among the intensely hierarchical House Democratic Caucus, arguing that his easy access to the levers of power helps his district. He has the backing of Speaker Nancy Pelosi and many of the party’s establishment pillars, like the Planned Parenthood Action Fund.

“There is no substitute in life for substance,” he said. “Substance is so relevant to people. That’s why there’s been a Clay there for the last 52 years.”

After falling about 20 points short against Mr. Clay in 2018, Ms. Bush has come back with a better-funded and more aggressive campaign. A documentary that chronicled her 2018 campaign, as well as those of Ms. Ocasio-Cortez and other progressives, “Knock Down the House,” helped burnish her profile. Perhaps more important, her aides argue that in the current moment of national upheaval, more voters are beginning to understand the need for policy prescriptions she has long championed, like Medicare for all, a $15-an-hour minimum wage, a universal basic income and the wholesale dismantling of police departments.

At campaign events, Ms. Bush speaks vividly about her own battle with the coronavirus this spring — how her fingertips turned blue as she was deprived of oxygen, and her fear of the medical bills that would follow her two hospital stays — to bolster her arguments.

But her case against Mr. Clay centers on the protests that have rippled through St. Louis after the deaths of George Floyd and Breonna Taylor at the hands of the police in Minneapolis and Louisville. Ms. Bush’s brand of politics is built on being on the streets with everyday people. By her account, Mr. Clay has simply not showed up and proposed only half-measures to fix things.

“When we were getting our butts kicked and I was maced in the face in Florissant a few weeks ago and people were getting beat on by police officers — no, no,” she said. “Did he show up the next day to say, ‘You can’t do this in my district, you can’t treat people this way?’ No, no.”

That message has won Ms. Bush the avid backing of a loosely affiliated coalition of activists, young people of color and white progressives enraged by the events of the last several months.

Jasnaam Singh, 23, who was among almost a dozen volunteers who showed up at a school parking lot in Ferguson to canvass for Ms. Bush on an unseasonably cool Saturday morning, said he first encountered her through a network of supporters for Senator Bernie Sanders of Vermont and then noticed her showing up on the streets again and again this summer, after the death of Mr. Floyd.

“Right then and there, I knew that she was a voice that the movement desperately needed to be heard in D.C.,” he said.

For those who have tended the protest movement since Ferguson — watching as Black activists and reformers have slowly gained footholds in City Hall here, the St. Louis County prosecutor’s office and in Jefferson City, the state capital — a victory by Ms. Bush would mark a milestone of another magnitude.

“She would fit right in as somebody who is pushing for the systematic change that we need, and not the small tedious change that we see,” said Rasheen Aldridge, an activist who won a seat in the Missouri Legislature last year.

The challenge for Ms. Bush has been persuading more moderate voters — Black and otherwise — to take a chance on a relative political novice who is unapologetically pushing for far-left policies like defunding the police.

Mr. Clay may not be wildly popular in the district, political analysts said, but he is not unpopular either and is considered a safe choice among the older Black voters who make up the voting base. And unlike Representative Joseph Crowley, who lost to Ms. Ocasio-Cortez in 2018, or Mr. Engel, Mr. Clay is a Black man in a plurality Black district.

Antonio French, a former alderman and mayoral candidate from St. Louis’s North Side, said he had noticed a “disconnect” between the progressive politics of many white voters and young activists of color rallying behind Ms. Bush and those of Black voters in his neighborhood.

“Defund and get rid of the police is not a message I hear from average voters in my ward or districts like mine,” Mr. French said. “It’s quite the opposite. If you go to a Black neighborhood ward meeting, primarily you are hearing people complain about the lack of police in that neighborhood.”

Mr. Clay points out that after Ferguson, he encouraged the Justice Department to investigate the city’s Police Department and force changes. He wrote key provisions of the sweeping police overhaul bill House Democrats passed this summer and heads an influential subcommittee with jurisdiction over eviction law.

And even as he lacerates Ms. Bush, Mr. Clay has made direct overtures to her allies. He signed onto the Green New Deal, the liberal climate and economic agenda that has been among their most prominent demands. It appears to have worked. Ms. Ocasio-Cortez, who campaigned for Ms. Bush in 2018, has sat on the sidelines this time around.

Ms. Bush rejected Mr. Clay’s efforts to portray her campaign as racially divisive and accused him of using dirty tactics with “racist undertones” when he sent a mailer including an image of Ms. Bush altered to make her skin appear darker.

“No one is targeting C.B.C. members,” Ms. Bush said. “What they are targeting is people who are not doing the work of the communities — and communities are suffering.”

The post In St. Louis, Testing Liberal Might Against a Democratic Fixture appeared first on New York Times.